Showing posts from March, 2010
Show all

The Ides of March and my discovery of sound film 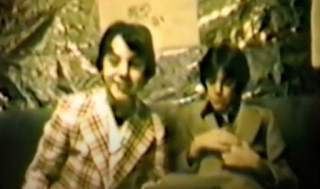 UPDATED FOR THE 40TH ANNIVERSARY still from Newstalk March 15, 1980 March 15, 2020 marked the 40th anniversary of my first Super 8mm Sound film. In early 1980, we were already into silent filmmaking for about a year. When Dan and I filmed Stunted Man in January 1980 at a local drugstore, I noticed an empty box from a Super 8mm film cartridge where customers dropped off their film orders. It had sound-waves on it. “What’s this?” I queried myself. “Could it be that you can actually record images and sound on a Super 8 cartridge?” The answer to me was a resounding, “yes” as I grabbed a copy of Super 8 Filmmaker from Dan’s room later that day to find out just what this “sound thing” was all about. I soon discovered that I had to get my hands on a Super 8mm Sound camera. My parents obliged with a Bell and Howell Soundstar from Best Products in North Randall, Ohio. My mother reminded me that I was indeed lucky to get this 13th birthday gift. Indeed I was. Both Dan and I later inves
4 comments
Read more

- March 08, 2010
Indeed I help to cover the news of tragedy. Sometimes it hits close to home as it did with me a few years back. A neighbor's mom was on a flight that crashed in Peru . I'm not sure of anyone else, but when that type of connection is established, it leaves me frozen-cold in my tracks. The recent Chile Quake is another such tragedy that left me with similar feelings. I learned through Facebook that one of the finest interns that I have ever known was in the thick of the quake. She wrote me a moving letter describing her horrific experience. I wrote her on a lark thinking that, well maybe, just maybe she was unaffected. I'm not sure where that wishful thinking comes from. After receiving the response, I'm now thinking about her and the scores of good people in Chile who are trying to repair their lives. Here are some links to help: Red Cross for Chile Habitat for Humanity for Chile
Post a Comment
Read more

- March 07, 2010
I caught some of the E! Preshow with Ryan Seacrest on this gorgeous Sunday evening. Everybody loves Ryan, it seems. Anyway, I saw some of the films nominated. I'm pulling for anything/anyone associated with "The Hurt Locker," "Up In The Air," and "A Single Man." After this evening, I'll have to see "Crazy Heart." I really love those character studies. It's always heartwarming to see those smaller independent productions get the notice that they deserve. While many are raving about films like "The Blind Side" and "Avatar," I can truly wait for those on DVD.
Post a Comment
Read more
More posts