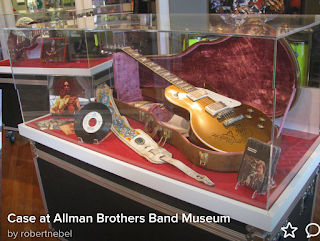 Everywhere I looked, I was surrounded by beauty and tranquility. The sun was working its way up in the southern Georgia sky as it was trying to peak through the magnificent trees over me. The sounds of robins and thrashers only intensified my experience as I dined on my breakfast in the courtyard of the 1842 Inn located in the heart of Macon, Georgia.

What seems like only a stone’s throw from my home in Atlanta, Macon was always a town to pass through on the way to its popular Georgia sister city, Savannah. How sorry I have been all these years for thinking that this was just a place to grab a quick lunch and gas up the car. Macon is a Peach State jewel filled with architecture, music, history and charm. All of those qualities can be found in the 1842 Inn. Built by the city’s former mayor John Gresham in 1842, this stately property boasts 19 spacious, ultra-comfortable and well-appointed rooms bearing such names as Confederate President Jefferson Davis, Georgia Governor George Walton and Declaration of Independence signer Lyman Hall. Rooms can be found in the main house which is done up in the Greek Revival style and an adjoining Victorian home in the back.

Even though the inn says on its Web site that, “the 1842 Inn blends the amenities of a grand hotel and the ambience of a country inn,” I felt like I was at a friendly Southern bed and breakfast. Emma, the front desk manager was expecting me. When I approached the desk, she immediately knew who I was, checked me in and gave me a brief tour on the way to my room. Within 48 hours, Emma became a friend who told scores of Macon stories and provided sage advice. You cannot get that from a large hotel.

At the inn’s parlors, I had the opportunity to meet other guests – many who were traveling the South and were curious about Macon. As we indulged on Emma’s hors d’oeuvres, we talked about our hometowns and the vanishing small towns in the South as large metropolises like Atlanta are spreading out into their backyards. I noticed the grand piano in the front. Since there are so many local musicians in town, we asked Emma if anyone has come in to play their piano. “Oh heavens no, it is way out of tune,” she confessed.

After hors d’oeuvres, I sat on the wide front porch just gazing out at College Street. The front porch is something that we’ve lost in our homes over the years and it’s a shame. There’s nothing like sitting in a rocking chair watching the neighborhood go by. It’s no wonder former owners the Adams family extended this porch when they were here in the early 1900s. The detail in the archways, pine flooring, light fixtures and 12-foot ceilings make the 1842 Inn something worth visiting.

To me, the best part of staying here is the breakfast. As a guest, you may fill out a card to hang on your door specifying your breakfast choices as well as the place where you would like to dine. I chose to have mine outdoors in their courtyard. I didn’t go wrong on these crisp mornings. You also cannot go wrong with your selections including French Toast or a Continental Breakfast. The service and quality are both impeccable. How could anything go wrong with people like Emma, Gloria and EJ at the front desk?

I needed a quick getaway from the hustle of the big city. Macon was the perfect choice. On our first night, I hit Cherry Street. The buildings that line this thoroughfare are amazing in their design. It’s a shame that so much of them are vacant. I just want to come in and open up a bevy of book, clothing and other retail stores. What is open on Cherry Street is a treat. I dined at Dolce Vita, a cozy tapas bar that features some of the best deep dish pizza that I ever had. It gives the Chicago pizza-makers a run for their money. According to my waiter, the chef brought the recipes over from Italy. Other interesting restaurants on Cherry Street include Luigi’s and Lemongrass, a Thai eatery.


After a restful night at the inn, I embarked on a plan to see quite a bit in one day. The first stop was at the Ocmulgee National Monument which is about a 15 minute drive from the 1842 Inn. On the way over, I stopped at Fincher’s Barbeque and took it with us to the monument where there are plenty of benches to eat your meal. The Indian mounds and museum are chock full of historical information and artifacts.


Just over the Ocmulgee River and into downtown is the Georgia Music Hall of Fame. After viewing its exhibits, there is no doubt that today’s modern rock and hip hop acts owe their success to Georgia homegrown artists like Little Richard, Otis Redding, Ray Charles and James Brown. Exhibits are dedicated to those men and countless other artists including Billy Joe Royal, Curtis Mayfield, “Ma” Rainey and many others. Exhibits such as the Gospel Chapel, the Coca Cola Drugstore and Billy Watson Music Factory bring the visitor close the music stories through sound and even film. I took my daughter Caitlin along and she loved the hands-on exhibits where she could play with different instruments to create her own sounds. While Caitlin loved those exhibits, she was thrilled to see some of her favorite artists in the museum including Usher and Ludacris. I was thrilled with the “established” acts including R.E.M., the B-52s and the Allman Brothers.

The Allman Brothers Museum at the Big House


Speaking of the Allman Brothers, their story is enshrined in a museum in the nearby Vineville area which is about 15 minutes from the Georgia Music Hall of Fame. The Allman Brothers Museum at the Big House is where this Southern legendary band created much of their classic works. The museum contains thousands of pieces of the band’s artifacts including receipts with guitarist Dickey Betts’ name and paychecks made out to Duane Allman. This is a musical archaeologist’s dream including Gregg Allman’s Hammond B-3 Organ, his custom “Melissa” guitar and even a pool table he shared with his then-wife, Cher. Displays dedicated to Duane Allman include a tape box from a solo project that never materialized his 1957 Gibson Les Paul Goldtop and a psychedelic jacket from 1967. The upstairs contains the band’s promotional photos, a relaxation room known as the “Casbah” lounge and Duane Allman’s bedroom. You can take some of the Allman’s history with you at the gift shop which includes tour posters, shirts and magnets. The museum is located at 2321 Vineville Avenue on your right if you’re heading from downtown. Look for the addresses and slow down when you get near it – this gem is easy to miss. It’s more than evident that the band, known as ABB around these parts, is still dedicated to the city that put them on the road to international success.

With little time left, we hit the Hay House. If you are interested in incredible architecture and craftsmanship, look no further than this spectacular mansion located on Macon’s Georgia Avenue.

Macon is a great place to visit year-round, but autumn is the best. With cool mornings, those breakfasts at the 1842 Inn are worth experiencing.