Visit South Carolina for the summer! 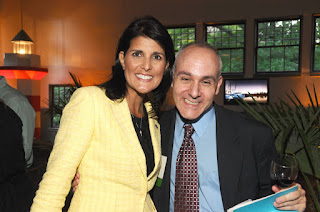 It was a gorgeous spring day in the Inman Park neighborhood of Atlanta. I rarely get the chance to visit this area even though I have been working around the corner from here for well over two decades. On any given weekday, I typically run back home in the ‘burbs to do all the household chores and get ready for the next day. Welcome to my boring normal weekday routine. Before I know it, the year is over. I love it when the routine gets broken, especially on a gorgeous low humidity day.

On this particular day, the nice public relations folks from all over South Carolina invited me to a place called The Trolley Barn to tell me and scores of other journalists about all the great things that have been happening in the Palmetto State these days.

Since I have been doing a lot of travel writing in my spare time over the years, public relations specialists enjoy meeting writers and editors alike to “sell” their destinations. To be honest, with South Carolina, I was sold on the state as a destination long before I got into travel writing. From Hilton Head, where I love to bike, up to Myrtle Beach and over to the Pee Dee region, South Carolina has always been quick, cheap and rather easy jaunt for folks like me in the Atlanta area.

Several cities and regions were well represented at the South Carolina Made for Vacation event.

The Old 96 District which includes Abbeville, Edgefield, Greenwood, Laurens and McCormick has some of the country’s best BBQ anyone could ever dream about.

The Thoroughbred Country area includes Aiken, Allendale, Barnwell and Bamberg. Speaking of Bamberg, their young, savvy governor, Nikki Haley is a native of this little town on U.S. 78. Governor Haley was on hand to act as “cruise director” as one local media outlet dubbed her appearance. The governor is incredibly enthusiastic about the state and her new job. I asked the governor if she gets back to Bamberg much these days – not really. After spending a lot of time in the capital, Columbia, Governor Haley typically heads back for R&R at Hilton Head.

Columbia has been typically known as a “pass-through” to Charleston, but that image is long gone. Restaurants, lodging and museums are festooned throughout the city. Aside from Columbia, this area known as the Midlands, also lays claim to Historic Brattonsville.

Of course, I can never forget the Charleston area where no one can go hungry and nearby Kiawah Island, where the awesome Sanctuary Resort is located.

There is more for me to explore in South Carolina. I met up with the Greenville folks who promised me that there are great biking trails in the city. I’ll have to make a return visit to the Upcountry area very soon. I’ll also have to explore more of the Pendleton District, Mountain Lakes, Beaufort and Lowcountry areas in the future as well.