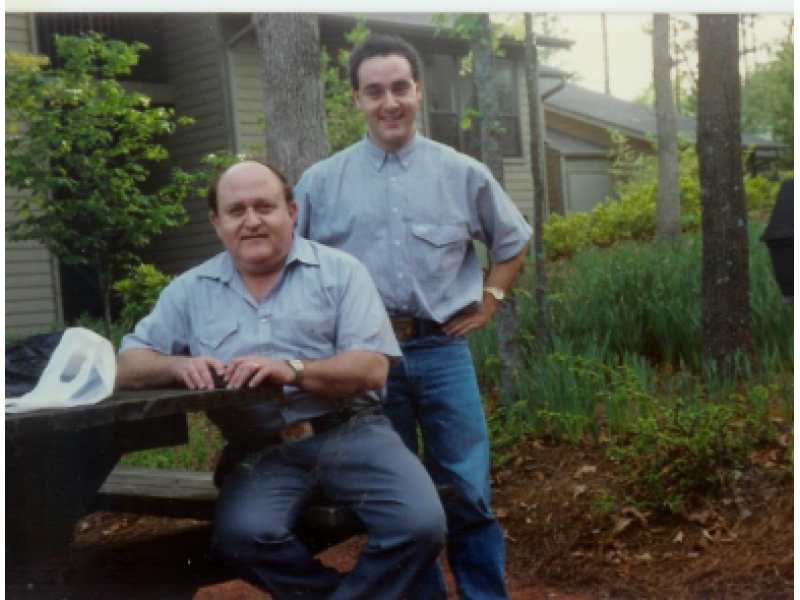 This is the first Father's Day without Dad. That conscious part tells me that it's just a fact, nothing else. It's just rational thought which consumes most of my days.

The subconscious thinking hits me at those unexpected moments - those gaps in time between scheduling my daughter's driving lessons, getting the roof repaired and grocery shopping.

Those moments, those brief gaps in time wash over me, especially on occasions when I say to myself, "Wow, Dad's not here. How long has it been? Over six months, already? How did that happen?" Sometimes I'll have a dream and Dad's in the dream. It wasn't the more recent version of Dad, but a dream that I'm in the old house in which I grew up in suburban Northeast Ohio. In the dream, there was the 1970s Dad standing in the kitchen, leaning up against a blue Formica counter top with his polyester get-up drinking orange juice logically explaining why he didn't take better care of himself. I awakened to repeat to myself that he's not with us. Strange, but it happens with me. I went through that many years before when my college roommate's mom passed away, succumbing to cancer at way too young of an age. "There goes my crazy, active imagination running wild," I would tell myself. That is what one gets for being so visual.

And so, this is the first Father's Day without Dad, ever. That fact alone only makes Father's Day 2014 unique to me. There will never be another Father's Day like it for my entire life. Certainly it makes me a bit melancholy, but what I do have are many fond memories including the most recent one which was one year ago.  I made it a point to see Dad last year on Father's Day not realizing if it would be the last for me. “Dad is in a good facility,” I told myself at the time. “They could keep him going on for years.” As it would turn out, my daughter and I unknowingly said our goodbyes.
The truth is that Dad didn't want to go on for years in a nursing home. It just wasn't for him. My grandmother on the other hand, thrived in that same facility about five years before Dad made it a temporary home. As much as the dedicated staff did all they could for him, Dad just could not stand these type of places. He told me that 26 years prior when we visited his father in a nearby facility on the same campus and countless times before that visit.

Dad was not one to engage in a myriad of physical activities in retirement like golf. He enjoyed his own space - in his own "upgraded retirement home." Mom and Dad didn't need that larger house, but for years it was their wish to move to such a place, a place they could call their own "castle" - complete with Dad's own office which housed his many dictionaries. Dad didn't speak a number of languages, but rather, he studied their word origins. When Dad wasn't in the office, he was at the kitchen table working on crossword puzzles in the local newspaper.

Dad worked hard for his "castle," about 50 years in total, standing on his feet, filling prescriptions. Aside from paying off that house, he was able to send me and my sisters to school. Dad didn't get to travel the world to see the many places in which he read about in National Geographic or use some of the languages that he learned in his dictionaries. I'm not sure if he had a desire to go to such places. Rather, Dad was dedicated to his family, spending so many of his non-work hours working on home improvement projects or driving us around Ohio in the early years to going to movies and dinner with us in the later years.

I'm not "down" on this Father's Day. I'll always celebrate the day by being the best dad that I can be while thinking about my own father.