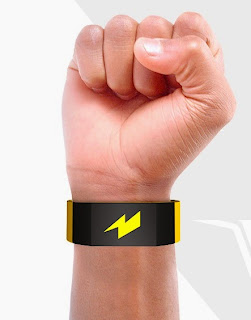 "What? Electroshock therapy devices will be available at my local retail store? You must be crazy!" one might shout.

Well the device that will be offered is not exactly electroshock therapy, but the gadget coming to market in 2015 performs a task similar to electroshock therapy. Pavlok is a fitness wristband with a twist. Unlike the Fitbit and other wearable bands out there, Pavlok shocks its owner when he or she is not reaching fitness goals.

Similar to the classical conditioning performed in Pavlov's dog experiment, Pavlok conditions humans to get off their behinds and hit the gym, or in my case, road. I enjoy cycling and running. I thought about Pavlok for a while and it could be a good thing, but do I seriously need something like electroshock therapy for discipline on those days when I just don't feel like exercising? And the thought of something like electroshock therapy sounds disturbing - like something out of One Who Flew Over the Cuckoo's Nest.

Pavlok Designer Maneesh Sethi would obviously disagree with my association of Pavlok being similar to electroshock therapy. Rather the device sends a mild shock when goals are not reach. This method of training develops and reinforces positive behavior. According to its website, "When you use Pavlok to stick to your goals, you'll find that they become easier and eventually, automatic."

One might disagree with such a method of training, but if the user is not harmed, how bad could Pavlok be to the consumer? If you think about it, plenty of people are conditioned in tough ways such as boot camp. Whether one experiences boot camp in the military or signs up for it in civilian life, it's a rough way to condition the body, but the results are excellent and no one's life is in danger.

Maneesh Sethi confesses in the Pavlok promotional video that, "Sometimes crazy works." Sethi might be onto something, but I do have some concerns with Pavlok. What would I do if I could not get the device off and at the same time it malfunctions sending continuous shockwaves through my body? The scene would not be so nice in the emergency room.

"Excuse me, but... OUCH! I have a problem here...OUCH!" I would attempt to explain in the waiting room.

Indeed that type of nightmare scenario would be highly unlikely, but if it happens, I'm sure emergency health care professionals have seen much more bizarre events in their ERs.

It is reported in several sources including Engadget that Pavlok will retail at $250 and will most likely be available in early 2015 - a good idea since most folks look to change their habits in the New Year. So, would you go out and purchase this device?