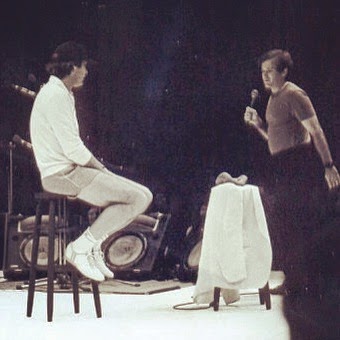 By the time you’re reading this, it’s already become history in our world of the never-ending news-cycle. Now that it’s history, where were you when you found out about Robin Williams’ death? I received the news via an alert on my mobile e-mail, just like I did about five years previous when I learned of pop star Michael Jackson’s death.

Indeed, I have seen scores of great performers pass over the years, but with Jackson and Williams, it hit me a little bit harder. I saw both Michael Jackson and Robin Williams perform live.

About 30 years ago I attended the Jackson family’s Victory concert on a cold evening on Ohio’s north coast. I felt the urge to witness a legend. To this day, I’m proud that I spent the funds - $30 at the time – to see an amazing show. It didn’t matter that it felt like I was miles away from the stage. I was a part of history.

A few years before the Jackson’s Victory Tour concert, I saw Robin Williams perform live. My friend Chuck invited me along to a fundraiser event for then-Sen. Howard Metzenbaum. Williams along with actor/comedian Chevy Chase and folk music legends Peter, Paul and Mary were putting on shows supporting key U.S. senators including Sen. John Kerry and Metzenbaum. While I appreciated the collective talent on the stage that evening, I was in awe of Williams. I was 15-years-old at the time and knew of him during the previous four-plus years watching him on ABC-TV’s Mork and Mindy. I had no idea that he was an incredible stand-up comedian/impressionist. Certainly the Ronald Reagan jokes were a little bit over my head on that night, but I will still never forget how Robin Williams performed live.

To this day, I have no idea how Chuck got us into close-up seats for the Sen. Metzenbaum fundraiser, but seeing Williams that “intimate distance” left an impression on me. I urged my parents to buy me his then-latest record titled The Throbbing Python of Love. For the next several months, I constantly played the LP. Even though Mork and Mindy was cancelled, I was thrilled to see Williams take on a more serious role in the film The World According to Garp. After The World According to Garp, the Williams films kept on coming – some good and some disappointing. Then there were the Comic Relief shows and stand-up specials including Live at the Met which I had to get on vinyl while I was in college. Beyond all of that were the countless Academy Award show appearances as a special guest, nominee and eventual winner. Oh and then who can ever forget the talk show appearances from The Tonight Show Starring Johnny Carson to Larry King Live where Williams spoke candidly about his addictions.

On that evening I saw Williams in spring 1982, I had no idea he had battles with drugs and alcohol. Even though I heard that he saw John Belushi just before that comic/actor succumbed to a heroin/cocaine overdose – just weeks prior to that fundraising event – I suppose I was naive enough to think that Williams was “just visiting” and was clean himself. Obviously, the world learned of Williams’ addictions through the years. From long sober periods to relapses to rehab check-ins and finally depression that brought him to end his life.

Just seeing social media light up and general media coverage go into “crisis mode” upon the news of Williams’ August 11th death is evidence that the comic/actor became a staple in millions of lives. Williams' films left me with many memories including the time my mom took me and my friend Rick to see Moscow on the Hudson. It will be forever imprinted on my mind after Dead Poets Society left my father in tears. Then there was the time my parents came to visit me when I was a new father and we went to see Patch Adams - just so I could get out of the house and get a "breather." With tragedy comes a silver lining and that is Williams’ collective, brilliant body of work will live on forever and be the gift that keeps on giving.