Deer mating season is upon us 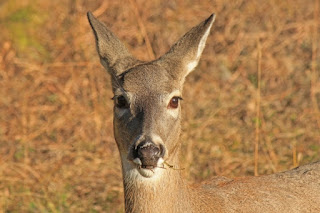 According to the Georgia Department of Natural Resources -- the state DNR, there are over 1.2 million white-tailed deer in the state. I believe around half of them take up residency in my yard. OK, that's a bit of an attempt at plain exaggeration for effect, but the fact is the deer are part of our landscape.  I'm in an area where deer roam from front yards to back eating anything that they can get their faces into including our grass, bushes and whatever was left of our flowers. From the caring gentle doe to massive bucks and those cute spotted fawns, I see them on just about any given morning run or bike ride. Whether I'm near the neighborhoods nestled next to the Chattahoochee River in Peachtree Corners or on the Alpharetta Greenway, the deer forage solo or in packs.

Depending on your view, deer are either nature's beauties or just a nuisance. With over 1.2 million deer in the state, there's no shortage of them, yet there are those nature lovers who believe in protecting them. On the other side of the issue are those who have no problem thinning their numbers in the form of hunting them. The Georgia state DNR states that deer hunting brings in over $800 million per year in hunting license fees, sporting equipment sales, food and land leases.

Obviously hunting is not allowed in the urban areas where people like me frequently go about our activities. So, the deer population only expands in the Atlanta metro area. What thins their numbers in the urban, suburban and exurban areas are perhaps some renegade hunters who take matters into their own hands and unfortunate car collisions with the deer. Those car collisions are more frequent as deer are far more active heading into the mating season which is October through January with its peak in November. Let's face it: those facts are easy to forget as we embark upon our busy lives in the autumn.

In a 2010 press release, the Georgia Department of Natural Resources stated that there were at least 50,000 deer-car collisions annually in the Peach State.  The release reminds readers that deer are not only confined to rural roads and highways. Active bucks looking for mates dart across main thoroughfares as well as side streets. It's not just the bucks who cross the roads, but a doe might be leading her family as well. If you see one deer there might be others following. The deer are most active at dawn and dusk when motorists are out on the roads going to work or school.

The state DNR has a few tips just in case it's too late to avoid a deer collision. Do not swerve to avoid the deer. I had a neighbor several years ago who attempted that maneuver only to end up on the sidewalk, taking out a mailbox. Of course the kid was out all night and was probably somewhat delirious coming home at an odd time. His dad made him replace the mailbox. Still, if it's too late and a large buck basically totaled your car's front end, it's more than obvious you'll not only need to speak with local authorities, but they might wish to dispatch medical help since you could be banged up from the accident.

As we head into another deer mating season, I would like to see counties and cities install more deer crossing signs that have blinking yellow lights to remind drivers of the increased deer activity. Certainly signs with lights cost, but no matter which side of the "deer fence" you are on, it would be nice to do what is necessary to avoid more deer collisions.

If you would like more information on increased deer activity, visit Georgia Department of Natural Resources website called Georgia Wildlife or call their office at 770-918-6416.