Pedaling to the ballgame? 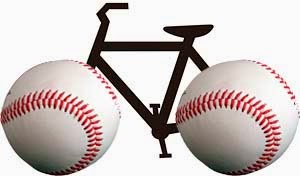 There has been a lot brewing in the Atlanta baseball world lately. The Atlanta Braves baseball organization decided a while back that they’re packing up and heading to the northern suburbs in the area come spring 2017. Supporters of this move say since that a majority of the baseball club’s tickets have been selling in the northeastern suburbs and exurbs for quite some time, so why not “build it and they will come” closer to those who will attend the games? Opponents include longtime fans who feel betrayed by the move and more importantly, many locals who say that they don’t want their tax dollars allocated to what they think is a “boondoggle.”
There are other issues related to the new ballpark. Those who manage the Atlanta Braves could not have chosen a more congested, complicated and overall hideous spot in all of the metro area. The area where the new stadium will be is not only where traffic essentially comes together in all of the state, but pretty much the entire Southeastern United States. OK, that assessment could be a bit of an exaggeration, but perhaps I’m not far off on this one.
The new Atlanta Braves baseball stadium will be near where the area’s so-called monster bypass also known as I-285, converges with I-75. I-285 is a traffic behemoth which circles the metro area. I-75 runs the length of the United States. Locally, this convergence is known as the Cobb Cloverleaf. The “Cobb” part of the “Cloverleaf” label is named after Cobb County. The “Cloverleaf” label describes the myriad ramps that connect I-285 and I-75. In short, the Cobb Cloverleaf has been a traffic nightmare for at least three decades if not more.
If traffic is already bad in that area, then why build a mega monster ballpark complex complete with stadium and a myriad of shopping and entertainment options? Many metro Atlanta residents, the baseball world, a handful of folks around the nation and myself have been following the development of this idea which will come to fruition in two years as I write this post. I have a feeling that we’re all scratching our heads as to why the new baseball stadium will be in Cobb County.
After months of reading and hearing about the new Atlanta Braves baseball complex, many say that it was a combination of connections and money that made this idea happen. While we may never know the entire story behind the new stadium, one thing is for sure: the new stadium is coming to Cobb County whether anyone likes it or not.
Aside from the supporters, opponents and the “follow the money” theory about the new Braves baseball complex, there was an amusing development that recently occurred. Atlanta Braves executive Mike Plant came up with a novel way to beat the horrendous Cobb Cloverleaf traffic: ride your bike to the complex! I confess that I nearly performed a “spit-take” on that idea. Really? Note to Mr. Plant: We’re not in Portland, Oregon any longer. For those not aware, Portland is open-minded metropolis that promotes public transportation and biking options.
Are you kidding me? As a longtime bike rider, I can barely pedal around our rather narrow biker-unfriendly suburban side streets much less state routes. Let’s remember that I-285 is not an option since bikes are not permitted on our highways, so state routes would have to suffice in that situation. On the other hand, at rush hour, I’m sure I can travel faster on bike than the cars on I-285.
On a serious note, Mike Plant is hoping that local communities could construct bikes lanes to make this idea possible, but let’s face it, we’re talking about car-loving suburban counties like Cobb County in addition to nearby Cherokee County and Gwinnett County. Certainly it’s a dream for Mr. Plant and bike riders like myself to see bike lanes and trails connecting our communities, but then there’s something called reality and in this case, reality bites. These counties never cozied up to the notion of alternative transportation including public rail, light rail, trollies, buses and bike lanes. At the moment, stubborn tradition trumps the future which is a bad thing. The entire metro area’s local governments ought to embrace a comprehensive alternative transportation plan. Investing in alternative transportation while improving existing infrastructure will attract those much-needed millennials to move to the Atlanta metro area. With alternative transportation options available, the area’s tax base will exponentially expand.
Perhaps Braves executive Mike Plant is referring to motorcycles or possibly scooters to get to future games, but I think I’m reading his suggestion right about traveling to the games via the manual bike. It’s a great idea, but the truth is pedaling to the games is not a serious option at the moment.