Back-to-school in the hot sun 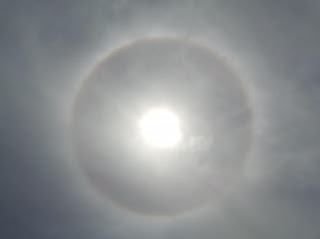 Perhaps it's a good to know that kids are in our air-conditioned schools rather than being outside for a majority of the day. With bad air quality and a strong sun, it's most likely best to stay indoors except for short recess. At this time of year, this is our version of "cabin fever" with the obvious difference being that we can get out and drive in our air-conditioned cars - a "must-have" in the Southeast.  In the North, "cabin fever" is accompanied by low temps and/or negotiating through snow and ice.

Some folks are saying that they would like a return to low temps, but I reply, "Be careful what you wish for." Indeed some people have short memories and can easily forget their winter experiences. I'm puzzled as to how anyone in Boston could forget their recent winter. I cannot believe the last bit of that notorious snow-pile finally melted not that long ago. Here's hoping that Bostonians are enjoying their summer and will have a mild upcoming winter.

Speaking of living in north of the Mason-Dixon line, I think it would make sense if they adopted a school calendar like some districts Atlanta's metro area that go back in late July and then flesh out week long breaks later in the school year. This way those schools located in snow and ice areas could have more time off when there is inclement weather. Of course, it's tough to predict what will happen in any given winter, but  chances are, students would be off when bad weather would strike.

As students head back to school in this heat, we could all only hope that the power companies keep the power on (lost mine for a time on Friday the 31st-you don't want that in summer!) and the students don't have long school walks under the hot Georgia sun.