Reflecting on the Fourth of July holiday

- July 06, 2015
As I write this, some folks near me are hopefully exhausting their fireworks supply. In case you did not know, fireworks are now legal in the Peach State. As predicted there were a few "fireworks fails" throughout the state during the recent Independence Day holiday weekend - which curiously started on Friday, July 3rd. I love how we will do anything in this nation to extend a weekend if a federal holiday falls on a Saturday or Sunday. Heck, I'll take it.

I had a wonderful weekend which included my first 10K. I finally ran the AJC Peachtree Road Race. Even though I have been running for years, I never entered a race. At times I was honestly working and couldn't get time off to do a race or I was apprehensive about running with other people. Those concerns vanished when I arrived with thousands of other participants near the start line. I'm thrilled that I finally broke the ice. To me, this race was perfect despite rain which was nice in one sense since it cooled me off. What makes "The Peachtree" so great is that there is a mixture of serious and not-so-serious  folks who all partake in the race and spirit of the Independence Day festivities.

I confess that I was concerned about getting enough rest before and after the road race due to the fact that folks love to blow off fireworks well into the evening. I thought that I was going to be up all night from the noise and not ready to get to the race on time. For years when it was pretty much illegal to blow fireworks off, it put me on edge. This year, I was a bit more nonchalant about my neighbors' ersatz fireworks displays.

I certainly hope that I'm mellowing as I age. Speaking of age, it was inspiring to see folks of all ages and stripes running the Peachtree Road Race. Partaking in such an event is what makes places the ATL metro area great. What's even better is having support. Cami as well as my daughter showed up to cheer me on.

So as the last sparkler sparkles and firecrackers die out, guess what is happening: back-to-school displays are going up in our retail outlets. I know retailers have to work ahead, but can't we just cherish the here and now by not seeing these back-to-school sections up before the Fourth of July? Indeed, some schools are going back into session during the last week of the month, but wow, this back-to-school stuff makes me melancholy. The truth is that maybe schools ought to go to a year-round schedule, pretty much the way life is, right? Still it's hard getting used to the fact that school is around the corner even before the fireworks finales finish. 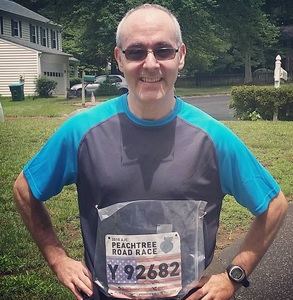 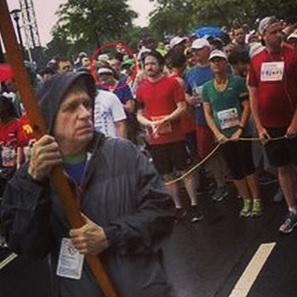 I'm behind the girl in blue. Photo by Ben Gray, AJC