Sometimes we need a little dark humor in our lives 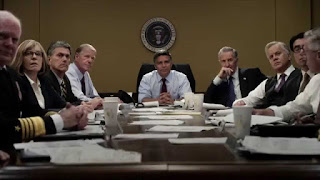 Once in a while a dark comedic film or TV series comes along and not only piques the public's interests, but resonates with the culture. Whoever could forget films like Stanley Kubrick's Dr. Strangelove which mocked the 1960s arms race or how Mel Brooks' The Producers  took on one of history's worst tragedies and mocked it in musical form? On television around that era in the late 1960s, it was Hogan's Heroes that took on the subject of prisoners of war and made a sitcom out of that tragic situation.

Making a comedic musical or a sitcom out of World War II? Sometimes I think about that and wonder how did they produce those projects without protesters shouting from the public squares? Oh yes, I'm sure that there were plenty who were offended with Hogan's Heroes and wrote the network and called their switchboards back in the day, but the program lasted from 1965-1971, so most of the U.S. (and later the world) never had a problem with the show.

In my estimation, humor needs to be employed to deal with tragedy. Indeed, the producers of The Producers and Hogan's Heroes are not insensitive. Rather, they used humor as a way to explain, reflect and perhaps learn from history's horrors in a different way.  It's called dark humor and sometimes we need it to make sense of ugly situations.

In my department, modern day dark humor took off after  the late 1960s. After Hogan's Heroes, MASH came along on the same network. For those not "in the know," MASH stands for Mobile Army Surgical Hospital and is based on doctors serving in the Korean War. The television series was based on the film of the same name and directed by Robert Altman. Altman took on dark humor by successfully juxtaposing tragedy and comedy. The TV series captured that mixture, but not quite in the same way. MASH the TV series seemed to be toned down from the Altman film by not being nearly as bloody in the operating room scenes. In its early years, America was still embroiled in the Vietnam War, but stuck with Altman's idea and used the Korean War as a parallel to depict the horrors of war through dark humor. As MASH the TV show aged, it became less of a sitcom and more of a "dramedy."

Flash forward to the present and we have HBO's The Brink. Again, the audience is treated to dark humor sans laugh track. In my opinion, why did networks insist on those laugh tracks for Hogan's Heroes and MASH? I'm wondering if there's any way those shows could be re-mastered to Blu-Ray minus the laugh tracks. I'm certain those shows' producers and directors did not want those laugh tracks. Anyway, The Brink puts dark humor on steroids. The show skewers our modern-day "War on Terror" by depicting a cast of bumbling characters who are putting their nation's security at risk through their own selfishness and incompetence. From Foreign Service officer  (Jack Black) who bumbles his way through Islamabad to the heavy drinking/womanizing Secretary of State Walter Larson (Tim Robbins), The Brink makes a humorous situation out of current events and the state of humanity these days. The Brink is dark comedy at its best. The cast is nicely rounded out with comedic actor Aasif Mandvi and rising actor Pablo Schreiber.

Dark comedy is always challenging so it comes with risk. Just like in the late 1960s, I'm sure that there are plenty of folks out there who have a problem with The Brink. Yes, one could tell those people to lighten up, but most likely that will not happen. I think Mel Brooks once said a gentleman went up to him saying that he served in WWII and was disenchanted with The Producers. Brooks said that he served as well and asked the man why he didn't see him in the war. Let's face, we can't please everyone. At the moment, I'm not hearing any outcry about The Brink, so maybe it shows that we have come a long way.