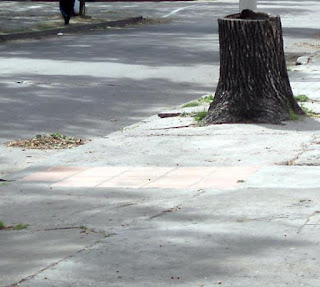 One my pet peeves in my neck of the woods is inconsistent sidewalks. Note to my colleague Mike: Yes, you may "rag on me" knowing full well that there are much larger fish to fry in this world. Indeed I need to get a life, but if this issue is one of my larger ones, then I'm not doing too shabby, right?

Runners, joggers, walkers, skaters and whoever else utilizes sidewalks in our area or most of Suburbia/Exurbia U.S.A. must contend with inconsistent sidewalk offerings. Whether one is traveling a few hundred yards or a number of miles, the sidewalk user is most likely confronted with a sidewalk path that either ends on one side of a street and begins on the other -- or completely dead ends, also known at a "Sidewalk to Nowhere." I confess that it's a hassle when I'm on any type of long run. Yes, I deal with the inconvenience, but it would sure be nice if communities like ours would have a common sense comprehensive sidewalk/trail plan.

Certainly building owners, homeowners, local governments have been faced with this dilemma for years. It is a dilemma because if it wasn't, we wouldn't have inconsistent sidewalks. Take for instance in the case of Sandy Springs, Georgia. Sandy Springs is one of the "older newer cities" in the Atlanta metro area. The city has a set of convoluted rules concerning sidewalks that has been met with a fair share of its own controversy. In short, any new development or re-development requires the folks engaging in such activity to be responsible for installing their own sidewalks. It seems that plan takes inconsistent sidewalks to a brand new level. Not only do sidewalks end in one place and pick up in another, but now this idea is asking everyone to install their own piece of the sidewalk network thus the city would offer a wide variety of sidewalks.

It seems that Sandy Springs' sidewalk plan is to save money for the city thus placing that burden upon those develop or re-develop land. Whether that plan is to put the city within certain fiscal parameters  or not really doesn't tackle the problem of inconsistent sidewalks. Certain residential folks who have problems with Sandy Springs' sidewalk plan would like a waiver if there is a sidewalk already on the other side of the street.  It was suggested that if one was to obtain a waiver, he/she would pay a $150-a-foot-fee to go into a fund to pay for future improvements. I'm doubting that city leaders, business owners and residents are on board with that suggested fee requirement.

These days it's probably asking for too much for communities to worry about building sidewalks, trails and bike lanes when there are far larger issues on their plates. Still, there's nothing to be proud of when pedestrians are faced with inconsistent sidewalks, thus forcing them out onto the street or worse yet, creating their own footpath in a patch of weeds. Indeed nothing comes for free in this life, but a network of connected footpaths for citizens is something that all communities ought to strive for in the future.

Unknown said…
Bob, I couldn't agree more. Not only do we need more and better sidewalks, we need a green space/pedestrian/bike plan for Peachtree Corners. Such a plan should not only include sidewalks but also greenways and bike paths. Now is the time to plan and implement a plan before our options are lost. There are opportunities everywhere you look. Crooked Creek could present an opportunity. The lower part of Crooked Creek is a priority area for a greenway for Gwinnett County. There are opportunities in Technology Park around the lakes. There are potential opportunities along the Chattahoochee, which by the way, is also a priority for Gwinnett County. Other existing corridors may have potential. We need to act now. If we wait much longer, the opportunities could be lost. Thank you for this editorial.
10:37 AM