The ultimate in 'pig parking,' new stadiums, Cecil and more 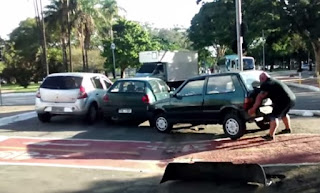 If there's a car in my way when running or cycling, I typically go around said vehicle. That's not what a certain cyclist did when he encountered a car parked on a bike path. A 'hero' simply picked the car up and moved it out of the bike path.  This method worked because the hero is a big guy and the car is not much larger than a golf cart. Still, this is something I wish I could do when I come upon such a situation. Unfortunately, I'm quite slight and about 90% of cars in my neck of the woods are SUVs, minivans or pick-up trucks. You get the picture.

Folks in my area down in Georgia are excited that casinos might one day come to the Peach State. After leafing through Jim Galloway's column on the subject, the state's House Speaker says that while he's not advocating for gambling, he's open to debate the idea. House Speaker David Ralston said that there's been interest from state House members in pari-mutuel betting accompanied with casinos. Those House members argue that horse betting supplemented by casinos could lead to success.

Here's something that folks from all over the U.S. can relate to when it comes to professional sports teams. In the ATL, the pro football team known as the Atlanta Falcons are getting a state-of-the-art stadium - just a stone's throw from the current 23-year-old facility. Then there's the future Sun Trust Park which will be the home to the Atlanta Braves baseball club. Far more brouhaha has been made over the Braves' ballpark, set to open in spring 2017. That ball-yard will be located in Atlanta's suburbs. It's almost tough to call the team the Atlanta Braves at that point since they will be playing in Cobb County, well north of Atlanta. Now there are rumbling that the Atlanta Hawks basketball team is nudging area leaders to either upgrade their current home at the over-15-year-old Philips Arena or they'll look elsewhere. It's tough to believe that both the Georgia Dome and Philips Arena are considered old, but in the modern sporting climate, it's called reality.

I would also like to give a shout-out to Melissa who hosts a great radio program Songs from the Attic. Melissa play a few requests for me this week. I was thrilled to say the least.


Lastly, there's been a lot of talk about Cecil the Lion. What's been getting a lot of attention today in relation to the story is ABC-TV's Jimmy Kimmel's emotional monologue on Jimmy Kimmel Live.