Watch This: Staying true to form - Halt and Catch Fire 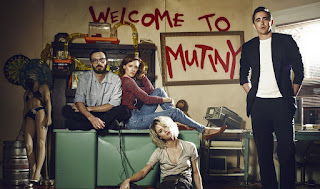 Halt and Catch Fire from AMC


Remember how audiences were wowed with Happy Days when it premiered in 1974? I suppose most folks were longing for the simpler times in life as the U.S. was ensconced in the Watergate scandal. The show kept up with the nostalgic look in its first year, but gently moved away from that 1950s/60s set in subsequent seasons. By its last season, one could hardly tell if Happy Days was set in the 1960s or the 1980s. In essence, the show abandoned its roots and concentrated more on the actors parading before the live audiences.

Thankfully the formula that Happy Days and other shows like it - we're looking at you spin-off Laverne and Shirley - took on, are not in vogue these days. Shows like Mad Men stayed true to form while producing quality shows with substantial scripts. Oh yes, the stars of AMC's Mad Men did quite well thank you very much. There was no need to get a live audience and parade Jon Hamm around. Mr. Hamm has done that quite well over at NBC'S Saturday Night Live. Yes, that's jesting, but just think how cheap the producers of Mad Men could have gotten in its later seasons.

AMC's latest hit drama Halt and Catch Fire has also been staying dedicated to its nostalgic look. Set in the mid-1980s, Halt and Catch Fire is about the rise of the PC market. 'Halt' effectively captures the salad days of computing when the Commodore 64 was the tool of choice. The look, the feel of that time period is accurate down to the houses where scenes are shot to the fashion choices of the day.

Halt and Catch Fire floors me sometimes because it takes place in a time period in which I experienced. The question is: Are Gen X'ers like me longing for that so-called 'simpler time?'