Watch This: Tom Cruise and Jimmy Fallon in a lip sync battle 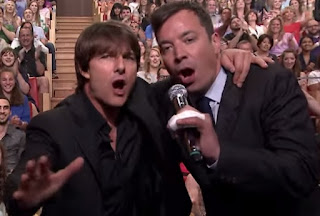 I wrote in a previous post that The Tonight Show Starring Jimmy Fallon is basically designed to spawn several viral videos. Last night's installment of 'Tonight'  featured actor Tom Cruise performing on the show's lip sync battles segment. The skit is silly, goes viral and promotes Cruise's new film, Mission Impossible: Rogue Nation. At the end of the day, both Cruise and Fallon pull the whole thing off, especially at the end of the segment where they sing to a female audience member.

Things were a bit more serious over at The Nightly Show with Larry Wilmore where the host further examined the Bill Cosby controversy. If you get a chance, check it out.