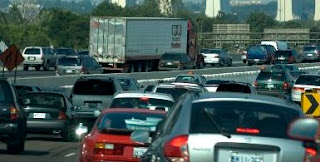 There’s been some brouhaha over how Atlanta ranks in the latest Texas A&M Transportation Institute findings. We’re number 12! Believe it or not, it’s far worse in 11 other metropolises in the United States.

Certainly the number 12 Atlanta traffic ranking is far from being a cause for celebration. The study’s conclusion states that Atlanta area commuters spend 52 hours a year in traffic. While there are some who don’t mind puttering around listening to their favorite music, talk radio program or Lord forbid – texting or watching videos, the fact is that we’re stuck behind the wheel.
I’m not sure about most folks, but commuting is a major time-waster, pollution-contributor and tough on our autos – especially those brakes! I’m as kind as can be to my brakes, but I’m sure my brakes would like me to give them a break.

The point here is that losing 52 hours to traffic is unacceptable, but what should the ATL metro do about this dilemma? Indeed communities try to tackle the issue. In Gwinnett County there was an initiative held inviting discussion on the issue with The Gr8 Exchange on Transportation. It’s a fresh, exciting idea which I’m sure me and thousands of others hope to see exponentially expand leading to action being taken. In other areas like Clayton County, there is great hope that MARTA will expand its presence in the community making it far easier for citizens to get to work, school and stores. Cobb County will definitely need to hold transportation discussions as they will attract thousands to future Atlanta Braves baseball games in their new stadium near the exchange of I-75/I-285 also known as the “Cobb Cloverleaf.”

There’s a lot of work to do in the ATL to improve traffic flow and air quality. In addition to strengthening existing infrastructure, the entire metro area ought to find an “All of the Above” plan. What is an “All of the Above” approach? The “All of the Above” approach includes developing a mix of improving existing roads, bridges, ramps, sidewalks and paths while developing alternative transportation services including more bus routes, light/heavy rail and bike lanes.
Speaking of bike lanes, there’s a major brouhaha over a bike lane plan on Peachtree Road in Atlanta’s Buckhead community. In recent times, there’s been intense interest to install bikes lanes on each side of the already-narrow Peachtree Road. Obviously Buckhead’s auto enthusiasts are disenchanted with the bike lane proposal while cyclists are delighted. Nevertheless, folks on each side of the issue will be upset to a degree. Drivers will lose some road while cyclists will see a modified version of the lanes which will not go as far as they would like. I suppose at some point, the lanes will end thus leaving cyclists to join the congested road again at some point or get on the sidewalk which is illegal according to state law.

If the Buckhead community’s Peachtree Road bike lane project will happen, it sounds like it will be a compromise. While a compromise is better than no deal, it’s a sad state of affairs that Peachtree Road became such a traffic-plagued corridor to get to the point in the first place. This is the result if poor planning or basically no planning, but there’s little we can do about that at the present.  I suppose we’ll see more scenarios like this take place throughout the metro area should communities wish to install bike lanes or any other alternative transportation project.

Compromise is what it will take to make a cohesive transportation plan to take place. Not only should communities work out compromises within their borders to make bike lanes, light/heavy rail, bus routes and improve roads happen, but the entire metro area needs to work together. Communities ought to take the courage to avoid “Balkanization” and look to work with one another. Compromise is easier said than done, but taking on a cohesive compromise is what leaders need to take to make the Atlanta metro area successful. That success will lead to attracting jobs and improving the area’s quality of life.