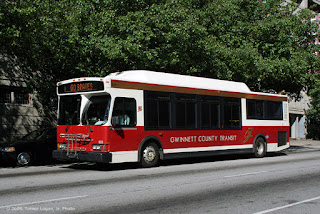 It took years, but finally my home county is having a grand conversation on area transportation. Located about 20 miles north of Atlanta, Gwinnett County, like other outlying counties, has resisted serious public transportation investment. I include local posts like this on my rather 'national blog' because these issues occur in many communities throughout the U.S.

Gwinnett County has been running a good bus system, but many who have lived, visited or worked in Gwinnett know that much more can be accomplished when it comes to transportation. The campaign spearheaded by involved leaders dubbed it 'The Great Exchange,' By August 24 an 8-question survey will be available. On the website thegr8exchange.com , people will have the opportunity to express how the county could spend $1.25 million over 18 months.

It's a positive sign when area movers and shakers get together to ask for public input into its transportation wants and needs. Obviously, I urge folks to get on the site and candidly complete the survey. It sounds like a variety of voices will have the opportunity to be heard. Gwinnett is home to people who are self-described fiscal and/or social conservatives to many who are environmentally concerned. The county also has quite a diverse population including a growing Korean and Vietnamese community.

I'm hoping that the program will touch on the following points: Do we wish to have more sidewalks, bike lanes, buses, heavy and/or light rail? Should Gwinnett expand its own system or allow MARTA to swallow it up and let that system expand throughout the large county? I also hope that people will have a say on how funding would continue into the future including the use of bonds and taxes no doubt.

A special thanks goes to Chuck Warbington, executive director of the Gwinnett Village Improvement District.