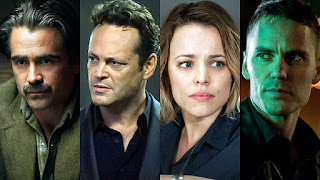 If you have been watching what’s going on with season two of premium cable television HBO’s True Detective, the good folks over at Slate attempt to explain the show’s convoluted plot. The acting, writing, direction and producing are obviously superior, but this season’s installment starring Vince Vaughn and Colin Farrell is painfully slow at times. I love character studies (my term for slower-moving films and TV shows), but this season is quite challenging. Cami was saying that we ought to watch the whole season over again – that’s a good suggestion, but I say, “Load up the coffee pots.”

While on cable television, just about everyone knows that The Daily Show with Jon Stewart is undergoing a monumental change this week when Stewart steps down from the “anchor chair” on August 6. Like millions of others out there, I’m a bit melancholy with this change. Indeed no one can do a job like that forever. Let’s face the fact that being in an on-camera TV position over 15 years is a long time. I cannot blame Stewart for exiting now to seek greater challenges in his long, promising career. I’m wondering if he’ll come back on as a guest whenever he has a new film or TV project to promote. Methinks we will see him in the future unlike former CBS-TV Late Show host David Letterman. At the moment, Letterman seems to be like his mentor Johnny Carson and seems to be enjoying retired. Although, I see more energy from Letterman who might pop up with some type of creative project one day.

I caught the season finale of AMC’s Halt and Catch Fire the other night. I’m still entertained by this program. Unfortunately the ratings are down and I wonder if AMC will give this one another season. I’ll put a spoiler alert on here by informing y’all that major characters are moving out to the West Coast. If AMC gives ‘Halt’ another season, I am curious if the show will continue to be produced in the Atlanta metro area. I certainly hope so, but perhaps it's a bit more challenging to make Atlanta area haunts look like Silicon Valley.

Okay, I'm jealous (here I go with another Billy Joel note-sorry Anthony Bourdain). There are a number of lucky (New York) Long Islanders who were treated to a special Billy Joel show at an area arena which is about to go through a major face-lift. Billy was joined onstage with legend Paul Simon who performed a few of his solo and Simon and Garfunkel songs. Since Billy does not live that far from the arena and it seems that a curfew was lifted, the show was extended with several extra tunes that he has not performed in a long time. I recall the HBO special Billy did back in the early 1980s from that arena. At that time, it was a huge deal. Anyway, band member/guitarist-vocalist extraordinaire, the incredible Michael Del Guidice got some much-needed stage time. Of course, I always love seeing band members Mark Rivera and Crystal Taliefero in these clips from last night. This was well-deserved since this is Del Guidice's stomping grounds. So, in short, those folks at last night's show attended a historic performance. 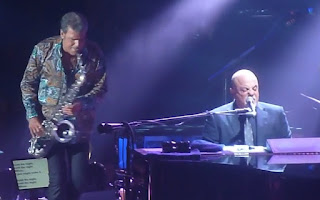 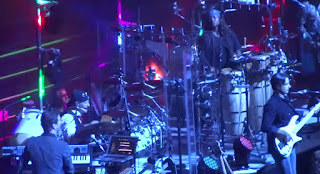 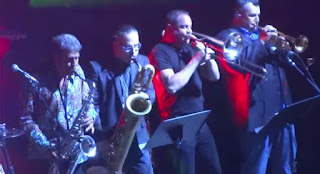