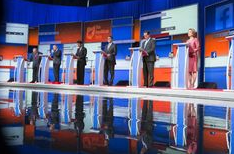 Whatever one thinks about the presidential candidates who debated during the evening of Thursday, August 6, it's nice to see them gather in Cleveland this evening. In many ways, the city has come a long way and just like so many other American cities, this town has its challenges. It's good to see my old stomping grounds get the national and even international attention that it has been getting this year - and will most likely next year when it hosts the 2016 Republican National Convention. Indeed, not all the news coming from Ohio's North Coast is positive, but at the end of the day, it's good to be 'Cleveland Proud' tonight.

CDC: Students up too early

The Centers for Disease Control says that adolescents are up too early for school. This has been always been a push/pull things since high school students get the opportunity to go to work right after school. Since they can work for say, four hours, students have plenty of time to get home, grab dinner and study. On the other hand, teens need their sleep. It's a dilemma indeed. The recommendation is for students to start at 8:30 a.m. CDC findings say that the average start time is 8:03 a.m. Still, if teens get to school at 7:00 a.m., they get out not far after 2:00 p.m. - plenty of time to work, study and sleep. The problem is that we're in an uber-24/7 electrified society - so sleep is a tough thing for teens today. I confess that it was a tough balancing act for me back in the day.

Stewart bows out
Comedy Central's The Daily Show with Jon Stewart is officially dropping the 'Jon Stewart' part of its title. Stewart had a great run by mixing comedy with the national/international conversation. I'm beyond impressed with how Stewart and his staff worked LexisNexis to find text that led to mash-ups of video clips to make profound points. That must be one stellar research staff. There's no doubt that this program has been a game changer in modern discourse. I hope that Stewart can bring those talents to the big screen. I think he did an amazing job with Rosewater - so I have a feeling we will see Stewart walk off with an Oscar for something incredible one day.