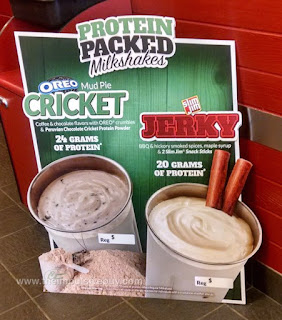 Would you drink up a cricket shake? Plenty of folks out there have been enjoying this shake throughout this past summer. Did you know that crickets provide a nice dose of much-needed protein in our diets? Who knew? Does anyone out there know if our friend the roach or better known as the Palmetto Bug has as much protein? If that is the case, we can make some protein-rich shakes. Check this out at Buzzfeed. Actually, I would go with the Slim Jim Jerky shake.

Here in the ATL metro, a pro-Confederate flag rally was held at Stone Mountain Park. Now, as I state here time and again, I hold no opinion on this subject whatsoever. I’m fascinated by this one tidbit: a U.S. representative showed up to the rally – incognito. U.S. Rep. Hank Johnson and his wife DeKalb County Commissioner-elect Mereda Davis Johnson blended into the crowd. It looks like Hank sported his argyle “Gone Fishin’ cap.” Speaking of fishing, I'm wondering if the catch is decent out there near Stone Mountain.

Let 'em in
No, this blurb is not about Paul McCartney. It's about another band, The Eagles. The uber-successful pop music group is being honored at The Kennedy Center Honors this year. I just got word that there's a petition to allow The Eagles' three former members to attend. Randy Meisner, Bernie Leadon and Don Felder heavily contributed to some of the group's biggest hits. Since the group originally disbanded in 1980, they re-grouped a number of times over the years-even recording new material. The re-groupings have been featuring four members Don Henley, Glenn Frey, Joe Walsh and Timothy B. Schmidt. The first re-grouped tour also included Don Felder in the early 1990s. Nonetheless, all Eagles ought to be at The Kennedy Center Honors. Here's a link to the petition.  BTW, I have the same birthday as Randy. That explains his sincerity.

Here's one for Last Week Tonight with John Oliver

Watch Futbol star Cristiano Ronaldo storm off the set. This happened when an interviewer asked a tough FIFA question. Cristiano was on set to promote his new line of headphones and instead was a tad rattled.

Hey all, it’s Meat Free Monday. Down here, most folks just want some watermelon instead of any heavy meal, especially meat. So skip the steak today and go for the tofu salad. Yeah, right (with a lot of people). The heat index is soaring. We hit the mid-90s today and high 90s tomorrow.