on August 18, 2015
I confess that this has been an emotional roller coaster month on a “quasi personal/professional” level. With news of President Carter’s health through the death of Civil Rights icon, Julian Bond.

Scores of folks who have been in my profession in the Atlanta metro area/state of Georgia for the past 40-plus years, have at some point, been involved with covering something about President Carter. From Carter’s time in Plains, Georgia, the state’s General Assembly, Governor’s Mansion, Oval Office, the Carter Center and beyond, it’s almost impossible not to cross paths with Jimmy Carter in the world of “Georgia Journalism.” In my years here in the Peach State, I crossed paths with President Carter at the Carter Center. On every occasion, President Carter seemed approachable, honest, dedicated to solid principles and most all, displayed that he has always been “one of us.” I found it amazing that here was a man who was the leader of the free world simply blending into the room. President Carter didn’t expect to have everyone in the room stand at attention like many of the famous expect when entering a facility. I am still impressed with that fact. When it comes to character, they certainly do not make ‘em like Jimmy Carter any longer. 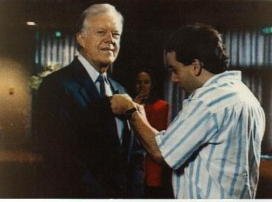 That is me, placing a mic on Jimmy Carter in autumn 1993

On an interview that I helped out with in autumn 1993, I witnessed an intelligent, intense and most of all, uber-punctual individual. As I was setting up for the interview, there he was! Actually about three minutes early. I was later informed that President Carter made it a point to be on time to everything. I’m not sure when he made that commitment, but methinks his strong wife Rosalynn has something to do with that.

Again, my memories are indeed one of millions who have had contact with President Carter. I bet those who were on “The Peanut Brigade” to people who worked on his staff in Washington to the Carter Center employees, my encounters are certainly dwarfed by their stories. With his latest health news, there is no doubt that he will fight the cancer that has spread throughout his body. I’m sure many folks are looking forward to seeing him stay active and fight the good fight.

On the heels of President Carter’s health news, came the untimely death of Civil Rights icon Julian Bond. Like many people in my generation and for those who did not grow up in Georgia, I got to know about Bond when he hosted NBC’s Saturday Night Live in April 1977. To soften the blow of “dating myself,” I was quite young at the time. My sisters would “babysit” me on certain Saturday nights so they would have me stay up with them watching the program. Obviously many of the skits went well over my head, but the show raised a lot of awareness in me. Of course I would watch many of those episodes in re-runs a few years later when I understood the material far better. I confess that almost 40 years later, I say, “Thank Goodness for Saturday Night Live!” Wow, how ground-breaking it was to have a Civil Rights hero host a comedy variety show. I later learned that Bond served in the Georgia General Assembly, head of the NAACP and remained active in Civil Rights issues for years. About seven years after Bond’s SNL appearance, the Reverend Jesse Jackson hosted the show. Jackson’s turn as host was equally challenging and hilarious as much as the show Bond hosted. There’s no doubt that these shows can serve as a history lesson.

Many years later, I “Friended” Julian Bond on Facebook. He came up as a suggestion – most likely because I have been “FB Friends” with many folks who crossed paths with the Civil Rights legend. Bond was pretty active on the social network with some good commentary.

No matter what one thinks of President Carter and Julian Bond, Georgia has been lucky to have them here in the state.