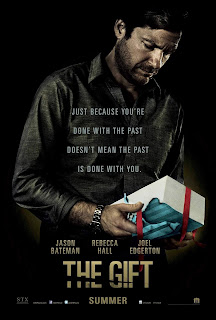 Over the weekend, Cami and I went to see The Gift starring Jason Bateman. It's a neat thriller that doesn't follow the Hollywood movie formula' in many ways. There are a number of nice jolting surprises as well as a great performance out of Bateman who skillfully plays a conniving jerk. Bateman possesses a wide acting range from the level-headed Michael Bluth on Netflix's Arrested Development to one of the biggest jerks onscreen, the character of Guy Trilby in 2013's Bad Words.

As expected, HBO's True Detective ended in a convoluted manner. I enjoyed the second season installment of the premium cable TV channel's show starring Vince Vaughn and Colin Farrell. I'm still not sure if I could go back and "re-watch" this entire season. This version contains a multitude of characters with a bevy of subplots

The Brink carries on its sarcastic saga with a U.S. Embassy evacuation attempt out of Pakistan and Secretary of State Walter Larson ultimately stepping out over the line thus seriously jeopardizing his career.

Now that school is back in session in our neck of the woods, overall traffic has increased from our summer levels. In addition to our area’s main arteries clogging even more, it’s time to once again think about when schools begin and end their days’ sessions. We are so easily programmed to be used to our routines that we forget, “Oh Lord, I forgot that school is letting out now!” It’s easy for that to happen. So the next time that you’re out and about, think about when that local school is starting or ending its day. Avoiding another hassle for the day can only make things better – whether you’re having a good or bad day.