Justin Bieber out on the plaza

- September 10, 2015
Somehow, some way, Justin Bieber's appearance on the NBC Today Show plaza caught my eye. Apparently Justin has another album coming out that he's excited about. I'm more excited that Justin looks like he is already honoring the High Holidays. Yes, Rosh Hashanah being at sundown this Sunday.

For those still not "getting it," it looks like Justin is sporting something similar to a tallit, the Jewish prayer shawl. 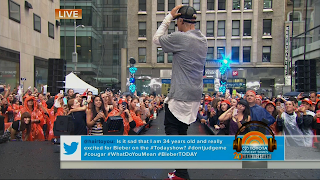 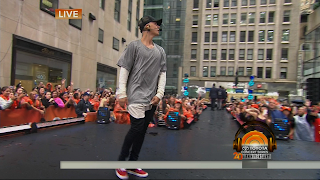 Later, Justin joined Matt, Al, Savannah et al to show off his new swoop-over 'do that is hiding under that hat. I will not provide the photo because you need to head on over to your DVR or On-Demand to watch this spectacle in real time.

Detroit Black Jacket said…
Bieber is really famous about the things we have to maintain some thing better for fashion and related things in market Justin Bieber Leather jacket at Buymoviejackets
3:33 AM