Looking for something outside the bun, how about a Naked Crispy Chicken Taco? 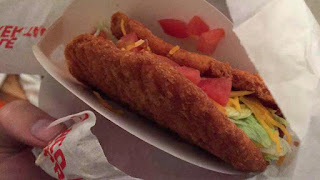 The Taco Bell saga continues and this time it's with an even more disgusting twist. Apparently the fast food taco chain has come up with a grandiose offer:  replace the hard or soft tortilla shell with... ready for this?... thick crispy, breaded chicken patties also known as the Naked Crispy Chicken Taco. So far, this offering has been spotted in California, where those folks tend to be the guinea pigs for just about everything. Forget this being a heart attack on a plate, or in this case a wrapper, but the simple appearance of such a concoction. Is this for real?

I suppose Taco Bell has found some genetically modified way to bend/form the chicken patty into a taco shell-like shape to make this thing work. Actually, I don't want to know how this could possibly work. I'm told that the taco can be filled with lettuce, tomato, cheese and even an avocado ranch sauce. I'm guessing the avocado flavor is to attract Californians into buying these naked tacos.

I'm enlightened to read that Taco Bell, KFC and Pizza Hut (all Yum! Brands) have always been on the cutting edge of mixing up foods. Let's not forget Pizza Hut's offerings of hot dog slices mixed into their pizza crusts. Then there's KFC which offered the Double Down Sandwich which consists of fried rounded-off chicken fillets which replaced the bun.

Aside from Yum! Brands, traditional sit-down restaurants have been getting in on the 'food-mixing act.' One need not look further than Applebee's which has been offering the All-Day Brunch Burger which includes patties with seared-in bacon and onions and topped with a fried egg and hash browns. Really, we cannot even keep breakfast sacred any longer? This all-day burger This burger is no Huevos Rancheros, which is a delicious mashed-up breakfast dish.

What are people behind the scenes at Taco Bell thinking or maybe in this case, smoking or vaping? These concoctions seem to be the result of kids or college students with too much time on their hands. It is always positive to "think outside the bun," and I can see what the folks at Taco Bell are doing by mixing Southern and Latino cultures. I'll be open-minded by saying, "Hey, this could work, right?" Maybe something like  the Naked Crispy Chicken Taco will catch on with consumers and in the end, history will be kind to such a food fusion.

Then again, there's something in my head saying that we have lost our way in this country and the Naked Crispy Chicken Taco is just another sign of our cultural decline.  Lord, what must chef extraordinaire/master traveler Anthony Bourdain think about this crispy chicken taco deal? I'm not sure if I want to hear those thoughts - my ears would be left burning. I have a feeling that Bourdain would disagree with my when I say:  at the end of the day, let the marketplace decide the future of crispy chicken tacos, burgers topped with eggs and hash browns and chicken-pattied sandwiches.