It's a two-way street for pedestrians, motorists 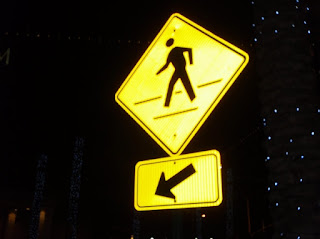 In early October of this year, a woman was killed while attempting to cross against the "don't walk" sign in a crosswalk. A few weeks later a person was struck and killed going across a road without using a crosswalk. A few days after that tragedy, a person was struck by three cars while attempting to cross a rather busy road. All three incidents happened in Georgia's Gwinnett County.

That same scenario was once again carried out in unincorporated Lawrenceville (Gwinnett County's county seat) in early November when a 76 year old woman was struck and killed. In that accident, the woman was walking in a crosswalk near an elementary school at 6 p.m. on a Monday night. It turned out that the woman was walking while the "don't walk" signal was flashing.

As we saw in each of those cases, ignoring the crosswalk and the signals puts pedestrians' and motorists' lives at risk. Those crosswalks and signals certainly save lives. Could all of metro Atlanta do a better job by increasing crosswalks, signals, sidewalks and more? Yes, but there will always be contingent of folks out there who will risk their lives by ignoring the very amenities out there to protect them from harm. I have seen it happen way too many times where people cross multiple lanes of traffic, only to hang out in center median strips. Worse yet, I witnessed folks walk in the roadway with traffic (not even facing traffic) while wearing headphones.

There's no doubt that counties like Gwinnett will increase pedestrian safety awareness on the heels of these tragedies. Here's hoping that as part of that campaign, they will emphasize to motorists to stop and render aid as best as possible to the victims. While the motorists who struck the woman in the early November incident rendered aid and spoke with authorities, in some of those October pedestrian tragedy cases, the motorists who struck the walkers fled the scene.  Who knows what compels a driver to flee the scene of an accident, but it's tough to comprehend how someone could strike a pedestrian only leaving him or her to suffer and in many cases, to die alone on the road.

As it has been said many times before - whether driving, running, walking, biking, skating or roller-blading - we all bear responsibility out on the road.