Much ado about not wanting MARTA in Johns Creek 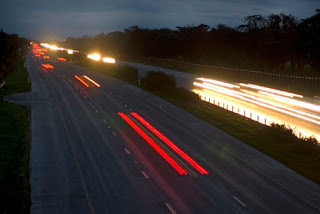 There's been much brouhaha last week up in Johns Creek about that city's opposition to MARTA rail expansion. On Monday, November 16, they city produced Resolution 2015-11-19 which essentially states that the city opposes a 1/2 % tax increase for MARTA expansion.  In other words, NO to MARTA in Johns Creek. Well, we've "seen this movie before."

In the aftermath of Resolution 2015-11-19,  proponents and opponents came out of the woodwork to conduct an attempt at conversation.  Those conversations show that this relatively new city has a long way to go in order to deal with its ongoing traffic congestion issues.

The bottom line is that something needs to be done about this city's horrific traffic. One of the city's thoroughfares, Medlock Bridge Road (Georgia 141) is a north-south congestion nightmare. At peak times, Medlock Bridge backs up well in Gwinnett County where the road is known as Peachtree Parkway. On heavier days, the congestion goes into DeKalb County onto Peachtree Industrial Boulevard. It would be interesting to know the percentage of commuters who are from Johns Creek in this nightly backup. Certainly a handful of commuters are from Johns Creek's southern neighbors which includes Peachtree Corners and Norcross. A number are from Johns Creek's northern neighbors in Forsyth. Nevertheless, a good amount of Johns Creek residents use 141. Nevertheless, according to  Johns Creek's Resolution 2015-11-19's first point: "WHEREAS, it is the duty and obligation of the Mayor of and City Council of the city of Johns Creek to represent the will and desire of their residents and businesses." In essence, the "will and desire of their residents and businesses" is to sit on Medlock Bridge Road?

Indeed this is dreaming, but imagine if there was a MARTA rail, light rail or something like it that served the area and could relieve commuters from that traffic scenario. Yes, it's dreaming, but with so much talent in the metro area, couldn't local governments along with the private sector develop an affordable public rail plan to serve this area?

So, let's go back to Resolution 2015-11-19 which also states that "WHEREAS, the expansion of MARTA will provide limited benefit to the residents of the City of Johns Creek." Perhaps there's not enough room allotted on this resolution, but where's the evidence to support that MARTA expansion will provide limited benefit to the residents of Johns Creek? If a comprehensive rail system was already in place, it would be hard to argue that the residents would not be benefit from such a system. If a light or heavy rail system could whisk folks from the Regal Cinemas 18 complex up to their townhouses on 141 in a safe, efficient and affordable manner, how could that be a negative? Hate to be a broken record, but where is the study saying that MARTA or something like it could not be good for Johns Creek?

One of my favorite points from Resolution 2015-11-19 is, "WHEREAS, the expansion of MARTA would increase the volume of traffic through the City of Johns Creek as users of MARTA." That unsupported point is followed by another unsupported point stating that MARTA would create high density housing thus eroding Johns Creek's fine residential character resulting in lower property values. These were the same unsupported arguments against MARTA's expansion into the Gwinnett CID on Pleasant Hill Road.

This all brings me to State Bridge Road. This east-west corridor picks up from Pleasant Hill Road in Duluth at the Chattahoochee River - this is the Gwinnett-Fulton line. It's well-known that Gwinnett's Pleasant Hill Road is a traffic-choked corridor despite the Band-Aid known as the Diverging Diamond and the reconfiguration at its intersection with Buford Highway. When it becomes State Bridge Road at the Gwinnett-Fulton County line, the nightmare continues for miles. I confess that the only saving grace is that Johns Creek installed a world-class sidewalk which goes for miles at the Medlock Bridge and State Bridge Road intersection. Now I know that the supporters of Resolution 2015-11-19 probably think this nice sidewalk is a boondoggle because a good deal of this resolution is not too cozy with the idea of taxation - and it had to be taxation that made the sidewalk possible. Nonetheless, people such as myself use this great sidewalk - no, not to get out and abandon my car. On second thought, that's not such a bad idea.

Here's another goodie from Resolution 2015-11-19: "WHEREAS, the inherent design of MARTA is flawed and cannot serve as an effective commuter rail system." Please tell that "finding" to the folks who have been using the system for years. To go from North Springs down to the airport is a wonderful amenity that has served thousands if not millions of people. How has that MARTA been ineffective? Certainly for a supposed world-class market like Atlanta, MARTA is limited because of past resolutions like this one, but MARTA's design is not flawed. That's plain ridiculous.

I'm not picking on the good folks in Johns Creek or its leadership. I'm baffled as to how they could come up with this resolution. Johns Creek's citizens want what is best for them. Who wouldn't? Okay, I see the frustrations in their document. I can certainly sympathize that they have been paying sales tax and not seeing their return. Still, I don't get why this resolution chock full of unsupported points and negativity was quickly passed without public input. Maybe the points contained in the Resolution 2015-11-19 make good sense to most of Johns Creek, but from my perch, I find the points to be ludicrous.

Unknown said…
This kind of resolution comes into being when you start with the conclusion and then try to come up with stuff to support it. The heck with critical assessment!
5:09 AM

Sherry Heyl said…
There are Johns Creek residents who want MARTA and are pushing back https://www.facebook.com/JohnsCreekWantsMARTA/
5:56 AM

Robert Nebel Tales from the Corners said…
@Sherry I certainly hope that there will be a groundswell of support for MARTA expansion into the city. The current leadership is stuck in its old ways. Johns Creek and communities like it need to look at providing transportation options if they wish to compete in the global marketplace. It's a fact that what is going on with their current traffic "plans" has not/is not and will not work. @Bob I think PTC (not P'tree City-they did own those letters first) is a bit more open-minded on this issue. What are your thoughts?
7:31 AM