We work with the snow removal equipment we have, not what we wish to have, right? 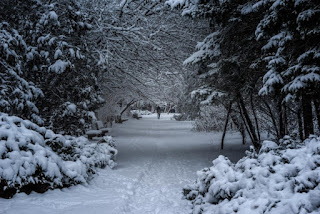 Winter weather storm Jonas packed a punch quite a bit more than most systems at this time of the year. Here we went again. Milk, bread, canned Spam, shovels, water, Charles in Charge DVDs, Netflix etc - check, check, check, check, check, check and check. Sound ridiculous, right? If creatures from other planets saw this thing going on, of course they would pass it all up to a quieter planet that contains far less panic.

We all know that we get made fun of more in the South than anywhere else when someone like Jonas comes to visit, but where were the comedy shows skewering D.C. the other day? A few days ahead of Jonas, about an inch fell on our nation's capital only to create enough panic on the scale of the debacle that happened in the Atlanta metro area just two years ago. It took hours for folks to get home. Some abandoned their vehicles, accidents galore - yadda, yadda, yadda.  Perhaps I missed the sketches and monologue jokes, but if they were produced, I'm sure that they were not on the scale of the skewering that the New York-based Daily Show with Jon Stewart and NBC's Saturday Night Live aimed at us in 2014. While the Buford Calloway sketch is quite funny, it still stings and reeks of condescension.

What wasn't funny was the fact that the storm affected us in the Atlanta metro. It doesn't take much to take our pine trees down. This past weekend, a postal service employee was crushed to death by a fallen pine while delivering mail at a local golf club.

To all of our northern sisters and brothers, again, snow, ice and sleet does not happen here all that much. So, why invest in millions of dollars in high-end snow removal equipment that will hardly be used? It doesn't make fiscal sense. We work with the removal equipment we have, not the type that we wish to have like in New York, Boston and Philly. With that said, when roads are barely treated, no one with great experience is safe on them. I should know, I spent nearly 20 years on Ohio's North Coast. Even in a place like Cleveland, which basically sits atop mountains of salt, the town gets hammered beyond their control. High-end equipment cannot prevent those in Northeast Ohio from  getting snowed in - when two feet of snow is resting upon their roads, lawns and roofs.

Okay, I get it: It's great fodder to make fun of the South in these situations, but remember, everyone gets their comeuppance - like it did in D.C. So fellow Americans in our nation's capital, Philly, Boston and even New York, hang in there, stay warm, safe and enjoy your Charles in Charge DVDs, provided that the lights stay on - which they should due to our great first responders and power company personnel who will no doubt be dragging trees off of power lines.

For me, I'm looking forward to everyone getting back to business as usual. C'mon, bring on the Iowa caucuses!

Sealexcel said…
Thanks for sharing these article about snow removal equipment. If you buy pipes in usa than visit here high pressure pipe fittings suppliers
11:21 PM

Limitless Snow said…
Great job for publishing such a nice article. Your article isn’t only useful but it is additionally really informative. Thank you because you have been willing to share information with us. salting for snow removal Burnaby
11:48 PM