Would you pay to see Madonna even though she shows up hours late? 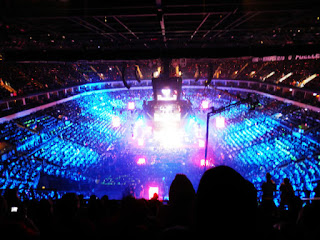 I confess that I was one of the many who missed Madonna on this last tour stop which came to Atlanta on January 20. Shocking indeed. Even though I rarely attend big arena concerts these days, I doubt that I would set aside the dollars to see someone like Madonna again. Yes, ‘again.’ I saw Madonna over 30 years ago.

Nowadays the cost to attend the spectacle is outrageous. I read in the local paper that one attendee spent $400 for his seats, not including transportation and food for the evening. Look, anyone can spend their hard-earned money any which way they see fit, but wow, hundreds (maybe even a thousand or more?) for one evening?

There’s no doubt that Madonna is a gifted performer and from what I read in the local paper’s review, it sounds like the evening was amazing. There was one glitch: Madonna’s show didn’t start until 11 p.m. That’s flat-out insane. Why the long delay? We have known for years that Madonna is a diva and quite proud of it, but 11 p.m.? Some folks have work and/or school the next day. Heck, that’s crazy even for a weekend evening when folks are either too darn old to stay up ‘til the show ends a little before 1 a.m. the next day. Oh yes, then there are a few who pay babysitters. On the one hand it’s quite rude to show up that late. Does this talented diva deserve a pass because she needs more time to ‘get in the zone?’ Most likely many would say that Madonna gets a pass for being tardy, but there has to be a few out there who are peeved at these late start times.

I was a senior in high school when I last saw Madonna. Thankfully she didn’t start over two hours late back in those days. I would have had one worried mother to deal with back then. Some might be asking why a guy in high school would see Madonna even during her so-called ‘hey-dey’ years. I was just fascinated with Madonna. No one looked or acted like Madonna. In the early 1980s, we got another one-name performer following Cher and Sting. The name stuck in my mind. Months before I attended that 1985 Madonna concert, a high school friend predicted her uber-success and history proves that he was right. By the way, he drove me to that concert. I was mesmerized by the videos with Madonna prancing about on a gondola or re-creating Marilyn Monroe. From “Burning Up” to “Material Girl,” I was sold. I even bought a Virgin Tour concert shirt and dared to wear it to school the next day. Trust me, it was far from cool to wear such a shirt when males in that school were heavily into Black Sabbath and AC/DC.

Throughout college, I was impressed with the follow-up releases to the incredibly successful Like a Virgin album. From blasting “Papa Don’t Preach” to the hit single “Like a Prayer,” I was beyond appreciative of Madonna’s work. Even in the 90s, I went to see Truth or Dare – which now feels like a reality television project rather than a film documentary. The film honestly displays Madonna’s diva side seemed to amuse certain theater-goers and turn off others in the audience. I was somewhere in the middle when viewing the film. Speaking of film, I enjoy Madonna as an actress. I think she’s been a natural fit in many of her film roles.

My interest in Madonna waned a bit from the 90s to today, but I’m still impressed with her ambition and success. Even though concerts typically start 45 minutes to even one hour late, I’m jarred by Madonna’s extreme tardiness. With such a late start and expensive seat prices, it’s hard for me to justify going to such a concert. For those who have no problem with the late start and price admission, there is one good thing about going to the concert: You’re helping to employ Madonna’s crew and the venue workers.