February came in and stayed like a sleepy cat 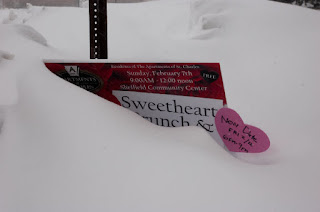 This February has been one tough month. Even though it's the shortest month of the year, psychologically it seems like the longest. Sure this year's February is one day longer, but somehow it seems like it dragged more than usual. I'm not sure what it is that made it seem longer. Perhaps it's the roller-coaster weather pattern was more intense than most years throughout the month? Since routine of consistent weather patterns seem to move time along easier, maybe because of the fact that one day it feels like spring and the next, it's blustery out there. I don't know - I'm quite confused.

As I write this post, just a few days ago, the Atlanta metro was under the threat of possible tornadoes hitting our neck of the woods. The weather mavens attempted pinpoint just when the bad weather would hit the metro on one overnight. From what I've experienced all of these years, the weather systems typically come in far later than predicted - of course, not 'always,' but most of the time the bad stuff hits a few hours after predicted. It was not different on this last 'go-round' even when the monsoon-like system hit the area in the 5 a.m. hour rather than 2 or 3 a.m. As usual certain areas got hit far worse than others - it's like a horrific lottery when one area gets all the downed trees into houses and on power lines while others barely felt the awful impact. Quite honestly weather systems do not discriminate. It's just a misperception that folks think that only poor folks in trailers get hit, but one only needs to look around and see that plenty of houses get hit by the bad stuff.

Speaking of horrific, many folks including myself battled some rotten viruses in the latter part of the month. Like many people, it was severe congestion, chills and aches, but unlike most people, I never had a fever. I rarely get full-blown sick. I believe the last time I had any kind of a virus was about a decade ago and even then, I went to the local Doc in a Box, received a magic shot and then was supplied with antibiotics and by that afternoon, I was at a holiday party all chipper and spry. Maybe it worked well for me since I rarely take any antibiotics. I'm not one of those who swears off modern medicine, but I like to limit the drug intake and stick with the vitamins if possible. Which brings me to another level when it's hard for me to be completely honest with myself to say, "Yes, I'm sick, let's be bed-ridden." For me, just resting is incredibly tough. I can take the rest for a certain amount of time, but if it's more than a day, I'm restless. I love catching up on my Netflix and HBO programs as much as the next guy, but the thought of the world passing me by makes me quite unsettled.

What made me even more unsettled was taking a break from running. I have been doing the activity for years so it's tough for me to take more than a week off from any type of running/jogging. Certainly I'm able to walk around and listen to my podcasts, but that doesn't quite fulfill me. So, to 'get back up on the horse' after being laid up is a challenge, especially on a blustery late February day. Even with some lingering congestion mixed with that pesky wind, I knew I had to take those 'baby steps' back into my routine. I confess that it's tough to volunteer myself to go back out and literally run into the wind when it's far easier to stay in bed, sip my Peet's coffee and view Vinyl again. But, I know that I can do all of that after a self-imposed punishing run. I didn't do too bad, but I'm not at my usual distance. I'm hoping that both me and the weather will be better in March so that I can be back in my routine. By the way, I'm not exactly wowed by Vinyl. I know it's Scorcese, but it's just not gripping me in so I'll still have to give that a try.

If you've been laid-up any time during this crazy February, what have you done to get back into your routine? Did you employ any psychological techniques to motivate yourself? I must say that 'getting back up on the horse' is one of the toughest things to do in life.