Mid-February thoughts and the Grammys 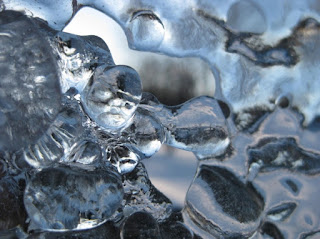 Remember how we were sitting around in a state of jitters wondering if ice was going to hit the metro Atlanta area on President’s Day? Thankfully there was no event so we breathed a sigh of relief -- for now. There’s still plenty of winter left, folks. Some storms hit in early to mid-March. Anyone who has been in the metro ATL for many years will never forget past ice storms which wreaked havoc with downed power lines, loads of auto accidents and way too many slipping on the ice and dealing with injuries.

February is dicey no matter where you live in the U.S., but when there’s the perfect brew of below freezing temps and precipitation, it’s no secret that we’re paralyzed in the metro area. Certainly we can prepare for the events, but still, there’s that ugly feeling of lives interrupted. Perhaps that’s a good thing because it reminds us that things are a bit more fragile than we realize.

Obviously we’re not guaranteed continuous power and solid infrastructure so we get those ugly ‘wake-up’ calls like an ice storm to tell us, “Hey, we’re not perfect by any stretch.” I’ll say it again: We have real heroes who go out there to restore our power and clean things up when a calamity hits our cities and towns. Calamity? That's a bit strong, but when we're going through it, the apple cart is more than upset. An ice storm also reminds us that society is interdependent. We’re all in it together to make everything happen. Yes, a no-brainer, but these events remind us. Nevertheless, I’m not advocating for another ice storm to make us appreciate of what we have. If we get out of this winter unscathed, we should all be happy.

Speaking of freak weather, we were hit with a mini-monsoon late on President’s Day complete with a thunderstorm which unfortunately produced intense lightning. A tree was struck by lightning which bounced to the roof of a Clarkston, Georgia apartment complex where folks were displaced by the lightning’s resulting fire. Yes, this happened in mid-February folks - just sayin'.

While the ATL’s skies were filled with lightning and rain poured down upon us, the 58th annual Grammy Awards was televised. For me, seeing some of the rather ‘newer’ talent including The Weekend, Ellie Goulding, Adele, Rihanna, Lady GaGa, Carrie Underwood is impressive, but I cannot get past how much they are slickly packaged with over-production and other enhancements. I like seeing acts like Foo Fighters (sorely missing this year, right?) getting in there to mix things up – to show that there is still raw grit underneath so much commercialization. What came close was the Motorhead tribute. By the way, Foo Fighters were there in audience since they were up for an award which they did not win and a presentation was done by lead singer-guitarist David Grohl.

Then the Grammys took a classic performer like Lionel Richie and linked him/her to ‘today’s artists’ like John Legend, Meaghan Trainor and Demi Lovato to breathe new life into the act with a tribute. For me, it’s a bit cheesy, Vegas-y, what do you all think? Yes, I know it’s a tribute, for producing a legendary catalog and a lifetime of achievements. Lionel Richie to me is still awesome in my book. I know, MusiCares, yadda, yadda. I'm sure Lionel loved the send-up and it's a great cause.

I enjoyed the Grammys’ tribute to The Eagles on the heels of the passing of the band’s lead singer Glenn Frey. The surviving Eagles members joined singer/songwriter Jackson Browne on their huge hit (which Browne wrote/recorded himself). When it comes to the late Glenn Frey, one could easily tell that Frey displayed a bravado like no other in the pop music biz. Frey worked hard and is obviously missed.

The big talk of the night was Adele’s performance of “All I Ask” which had some sound technical glitches. It’s live TV which of course takes its risks. As everyone else said the day after, the ever-professional Adele handled it well.

While I could have done with far less Justin Bieber at the Grammys, there was a lot of ground that could have been covered. It was all saved for me to see Alabama Shakes receive an award and perform.

As of this writing, we are past the midway point in Freaky February. There’s no doubt that there’s more to come.