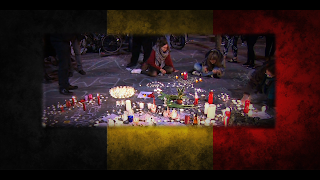 I visited Brussels twice in 1995. The city was a connection point to get to Paris in the early part of the year and London in the latter half. On both occasions, I was wowed by the understated elegance of this European city. When arriving there directly from Atlanta, I was curious as to why the airport went by various names including Brussel Nationaal or Bruxelles-National or Brussels-Zaventem. Are they so sandwiched between Germany and France that they need to have three or more names for everything? The airport was eerily quiet when I was there. It seemed like a scene from a strange Wim Wenders film where there is an air of mystery in the air. Arriving at the local rail stations was a step back in time for me. It didn’t help that I was there in February and December respectively that year which made conditions quite dank. Like many tourists passing through, I walked the town, sampled the chocolates and local cuisine.

Now more than two decades later, I weep just like I did for New York in 2001, London in 2005, Paris last year and now Brussels – because I was in all of those places before and in New York’s case, after their tragic events. Certainly there are millions who passed through these places, so I’m not special, but I do have empathy for the situation. I mourn for those closely impacted by these acts of terror. There are no words to alleviate or express the agony of being a victim of terrorism. For this, I make this entry "Requiem for Brussels" and I am thinking of those beautiful innocent people who were murdered.