Will the use of viral videos affect the future of late night programming? 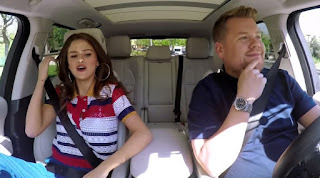 From The Late Show with James Corden, CBS Television

I frequently think about the state of late night television. I need to get a life, but the topic fascinates me. For people millions of folks like myself, we saw the transformation of the late night television landscape from the days of The Tonight Show Starring Johnny Carson, The Tomorrow Show with Tom Snyder, Late Night with David Letterman to today’s battles with The Tonight Show Starring Jimmy Fallon to Late Show with Stephen Colbert, The Late Late Show with James Corden and Jimmy Kimmel Live.

So many of my generation and those before it recall Johnny Carson ruling the late night landscape at 11:30 p.m. eastern time with little competition from the other networks. Cami and I frequently discuss that when we are in our late childhood and into adolescence, there wasn’t any late night programming targeted towards us. For a time in our lives, there was 5-6 television channels to choose from and in the early basic cable television days, there was perhaps 15 channels. Still, there was no late night programming targeted towards us, so we watched Johnny at night whenever possible. By the way, Cami brought that point up about the lack of targeting in those days. In some ways that adult content probably went over our heads while possibly making us grow up a tad more quick. Certainly the San Diego Zoo’s Joan Embry was understandable to us, but maybe comedian Don Rickles’ jokes or columnist Calvin Trillin’s stories left us perhaps a little “out of the loop” on occasion. What was great about show’s like Johnny’s or the daytime counterparts including Mike Douglas, Merv Griffin, Dinah Shore and Dick Cavett’s program is that they contained good conversation. While Mike, Merv and Dinah broke out into song and Johnny did skits, those shows featured good interviews. Dick Cavett and Tom Snyder were in a class all by themselves with bold interviews. In Snyder’s case, those interviews were done in a stripped-down setting more like PBS’ Charlie Rose program has been doing in recent years.

Over the years, the other networks attempted to challenge Johnny with Wheel of Fortune’s Pat Sajak trying out a late night program on CBS and entertainer Alan Thicke with his syndicated program. ABC’s Fridays tried out a late night variety show to draw viewers, but Johnny remained king for three decades. It wasn’t until the late 1980s/early 1990s when The Arsenio Hall Show attracted a solid audience thus challenging The Tonight Show Starring Johnny Carson. Johnny called it quits in 1992 while his late night successor David Letterman -- who had a successful run on Late Night throughout the 1980s and into the early 1990s-- was expected by some to take Carson’s spot on The Tonight Show. It turned out that Johnny’s frequent guest host Jay Leno took the show over thus creating a rivalry with Letterman bolting to challenge ‘Tonight’ at CBS with Late Show with David Letterman.

Today, Jimmy Fallon, who took over The Tonight Show after long run on NBC’s Late Night and before that, as a player on Saturday Night Live. Fallon assumed the Late Night chair after another former ‘SNL’ alum Conan O’Brien ruled that program through the 1990s and into the 2000s. A far larger late night debacle occurred when O’Brien took over ‘Tonight’ for a brief period while Leno had his own 10 p.m. eastern hour long show. After that experiment failed, O’Brien bolted from NBC and ‘Tonight’ to later star in his own basic cable talk program. Yet another ‘SNL’ alum Seth Meyers took over NBC’s Late Night. Stephen Colbert succeeded David Letterman on CBS’ Late Show and of course, Corden on The Late Late Show. ABC has been doing well with Jimmy Kimmel Live. Now that both Leno and Letterman vacated their chairs, there seems to be a kinder, gentler rivalry in the late night landscape. As far as I know there’s no mean-spiritedness between these currents hosts like we the world witnessed between Leno and Letterman.

Today, it’s a crowded landscape between all these gentlemen. Notice I write, “gentlemen.” Women have yet to break the “Late Night Glass Ceiling.” It must be noted that women made headway into the major network newscasts with Kate Snow on NBC, but Ms. Snow is still not full-time, Lester Holt anchors most nights. Diane Sawyer did a great job at ABC, but that chair was taken over by David Muir. So women have a lot of work ahead of them to make their mark on these television institutions.

What’s been fascinating me lately is how Jimmy Fallon is beating his competitors. When Executive Producer Lorne Michaels intimated that Fallon is the closest thing to Carson, I would slightly disagree. Fallon draws more heavily on his improvisation and musical skills rather than any type of interviewing skills. Hence, we are seeing The Tonight Show skits going viral on their website and on YouTube. Fallon’s skits are well-done and of course, cute. Over at CBS, James Corden also produces cute skits that go viral online like his ‘Carpool Karaoke’ sketches. The latest installment as of this writing features young pop star Selena Gomez singing along with Corden in an SUV and even visiting a McDonald’s – how’s that for ‘subtle promotion?’

Both Corden and Fallon obviously draw younger viewers and a good swath of America known as ‘flyover country’ would rather ‘lose themselves’ in these viral video sketches rather than view political satire which Stephen Colbert offers up on Late Show. Most likely behind the scenes, network executives are taking note and will probably one day once again, readjust their late night schedules to cater to the younger viewers and ‘flyover country folks.’ Colbert, who came from basic cable television’s Comedy Central with The Colbert Report after nearly one decade, created a niche television viewing experience. News junkies and college students alike aided in Colbert’s success. Bringing that audience over to mainstream late night television has been challenging. Colbert’s material is available online, but again, it requires the viewer to possess background information and to think a bit. Viral videos do not require thinking. Just think back to the kid who was still under sedation after visiting the dentist. More recently, think about the woman laughing uncontrollable with a StarWars Chewbacca mask. That video went so viral, James Corden had the woman appear in one of his own viral video sketches with StarWars director JJ Abrams. ABC’s Kimmel has produced viral videos which have played well, but Corden has done an amazing job with the release of his Selena Gomez carpool karaoke video with over 16 million views on YouTube alone!

Will the future be more Fallon versus Corden in the viral video arena which in turn will affect late night programming? As of this writing, it seems quite likely.