The world turns its gaze towards Philly 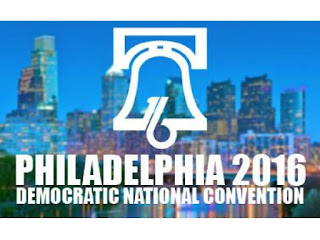 Another convention season is now in the history books. All the speeches were passionate and quite riveting - obviously some more than others. The DNC put on a great show. I feel that the AJC's Jay Bookman sums it all best right here (click here)

...and this happened during the morning of DNC Day 3. John Hinckley set to be released
Here is a backgrounder from last year (2015):

Back to the '90s!
Awesome Colbert opener references the speech of Bill Clinton returning to the DNC to give another speech


Colbert knocks this one out of the park...or in this case, arena (which he only visited before returning to New York)

The talk of the night is the first lady's speech, but what was more telling was comedian Sarah Silverman getting real at one moment telling Senator Sanders' supporters that they were being ridiculous. Ms. Silverman along with U.S. Senator Al Franken were told to stretch it on stage before singer/songwriter Paul Simon took to the stage. Who knows, but for some reason Paul must have had issues with set-up which showed in his rough performance. Now I'm far from being a musical performer but I can only imagine that it is tough to perform at an event like the DNC. The crowd is not really focused and the house and TV lights are at full blast. It must be a challenge to "get into the mood." Indeed that's not an excuse for a veteran like Paul Simon, but even with more than 1/2 century of performing under his belt, that had to be quite frustrating. Just think about it when one goes to a concert, the mood is set up to be "just right" for the performer - some performers have it in their contract riders to burn incense on the house floor going as far back as the sound board. Trust me, I have seen that. Anyway, that first night at the DNC was filled with some great speeches.


2016 Democratic National Convention Night One from Robert Nebel on Vimeo.

Could the Peach State be in play?
The local paper in my area came out with an interesting feature on the presidential race in Georgia. It would certainly be amazing if this state could be in play for the Democratic party which has not been competitive since 1992. I'm not sure if I could believe the headline, but here is the article - again, food for thought....

Now that the Republican National Convention is in the history books with the official coronation of Donald J. Trump, attention shifts to Philadelphia where the Democratic party will hold its convention. There's no doubt that Philadelphia will play host to a number of historic moments with the first female nominated in a major U.S. political party.

Even though politics with the constant conversation of delegates, super-delegates, e-mails, Hillary, Tim and Bernie take top priority in Philly this week, the legendary culture plays second banana. I'm expecting plenty of 'scapple' and 'cheese-steak' talk this week. Even though I originally hail from Ohio's North Coast where last week's convention was held, I heard little about Philadelphia while growing up in Cleveland. Actually, I heard much more about Philadelphia while living in the Atlanta area when the Atlanta Braves played the Philadelphia Phillies in playoffs in the 1990s.