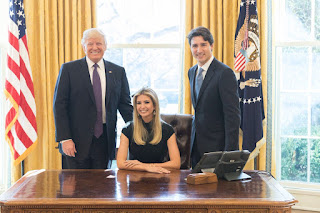 There's been some reporting that the first daughter Ivanka Trump was "swooning" over Canadian Prime Minister Justin Trudeau during his first official to the White House. I'm puzzled as to why the swooning is just reserved for Ivanka. Apparently, Justin makes everyone swoon for various reasons.

I confess that I'm impressed with the guy's gravitas. Justin just has that "it" factor that probably most of us in the US would like to see transfer over to our president. Indeed we are not holding our breath, including Ivanka.

I'm sure there are plenty of guys out there with a man crush on Canada's current prime minister, but I'm not so sure I possess that feeling about Justin. I'm just impressed with Prime Minister Trudeau's style in both his swagger and leadership skills. I was always a fan of Canada since I grew up not terribly far from that nation. In fact, I "obtained" a Canadian ID in 1986 out of my utmost respect for the country. Well, not really. Even though I was able to drink beer and beer-based drinks at that time, I still wanted to get a hold of hard liquor, wine and wine coolers by showing everyone that I was 21. The ID only worked once while in college. 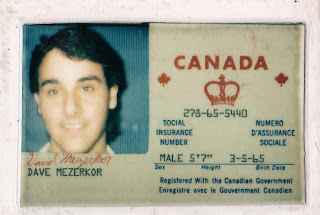 I went by Dave Mezerkor in tribute to a kid who briefly attended the high school in which I attended in the 1980s. Still wonder where Dave is these days.