Showing posts from December, 2017
Show all

We avoided another 'Snowpocalypse' this time 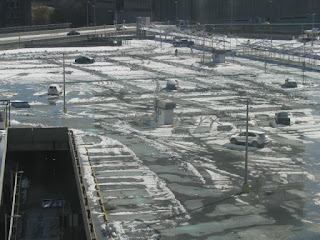 Photo by Robert J. Nebel - a downtown Atlanta parking deck, "thawing out" after Friday, December 7th, 2017's historic early season snowfall Whew! We avoided another Snowpocalypse – this time. The ingredients were there, all right. Most of us -- weather forecasters included – rested upon our laurels thinking that perhaps an inch of light snow was going to fall on December 8 th , 2017. “Only snow on grass, bushes, grills, roofs and decks!” the forecasters proclaimed throughout December 7 th . We woke up to a quiet Friday morning with some moisture, but my mid-morning, the flakes started falling. By afternoon, the snowflakes’ numbers were increasing as well as their sizes. While school was not called off that morning, suddenly, most parents scrambled to get their kids. The saving grace was that there was a break in the snowfall. This easily could have been a repeat of the 2014 debacle. Authorities on the state level felt that there was no reason to panic a
1 comment
Read more
More posts