Showing posts from January, 2018
Show all

We Are Number One…Not For A Great Thing 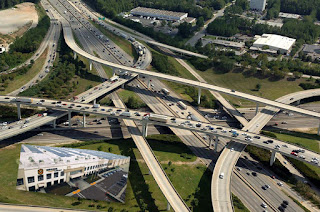 Just imagine Hooray, we are number one in the nation with the worst-ever interchange. To local in Atlanta, the nation’s worst interstate interchange is known as “Spaghetti Junction.” To out-of-town folks, it is known as the Tom Moreland Interchange. The honor was bestowed upon the Atlanta metro region by the American Transportation Research Institute. They say that Spaghetti Junction, a combination of I-285 and I-85, is the slowest interchange in the country. Having lived in the metro area for many moons, I’m not surprised. It’s the biggest challenge on my drive as well as thousands of others who need to commute into the city daily. Whether it’s a wreck on I-285, I-85 or on any of Spaghetti Junction’s massive ramps, traffic nightmares are quickly created. It doesn’t take much for bottlenecks to occur in the area on any given day or pretty much, any given hour. When it comes to the Atlanta area’s roads, they simply never sleep. Aside from bad traffic conditions that make
Post a Comment
Read more 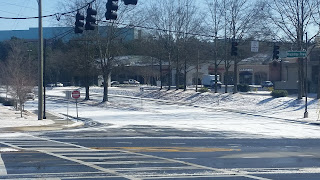 January 17, 2018/Photo by Robert J. Nebel As of this writing, we are barely halfway through winter 2018. With that stated, the Atlanta metro area and much of the Southeastern US has weathered multiple snow and/or ice events that resulted in school cancellations, lost business days and stir-crazy parents with kids who felt like shut-ins. Certainly today’s electronics can keep kids busy while being “locked up” in the bedrooms, but too much time with electronics is a bad idea. Unlike those in the Northeastern and Midwestern portions of the United States, our snow/ice events ended thus ushering in winter sunshine days. As we enjoy the current mild period, the looming question remains with us as we soldier on through winter 2018: will there be more snow/ice events? I’m placing my bets that we are due for at least one more event before we see spring. Forecasters claim that we are entering a dry, less active period of winter, but I find that hard to believe. It seems to m
1 comment
Read more

Deja vu over and over with winter 2018 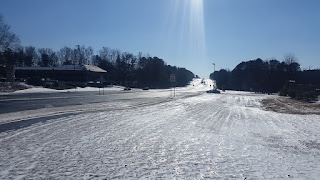 Peachtree Parkway, January 17, 2018. Photo by Robert J. Nebel Here we go again with the ongoing saga of winter in the South. After being in this region for many moons, the whole discussion is beyond tiresome. With every snow and/or ice event, it all plays out like the 1993 Bill Murray film feature Groundhog Day , a story where a man wakes up to the same day repeatedly. Just like the recent December 2017 and January 17 snow events that hit the Atlanta metro area, the Bill Murray film will constantly be playing on some television outlets, most appropriately on, Groundhog Day, which there will be many prayers going on with what Punxsutawney Phil will do on that day. Speaking of groundhogs, did you know that Georgia's groundhog will be appearing, most appropriately, in Butts County - which, by the way, is covered in snow as I write this post. Yes, Butts County and points north and south have been blanketed by snow on January 17. The extent of this snowfall was unexpected to a
1 comment
Read more 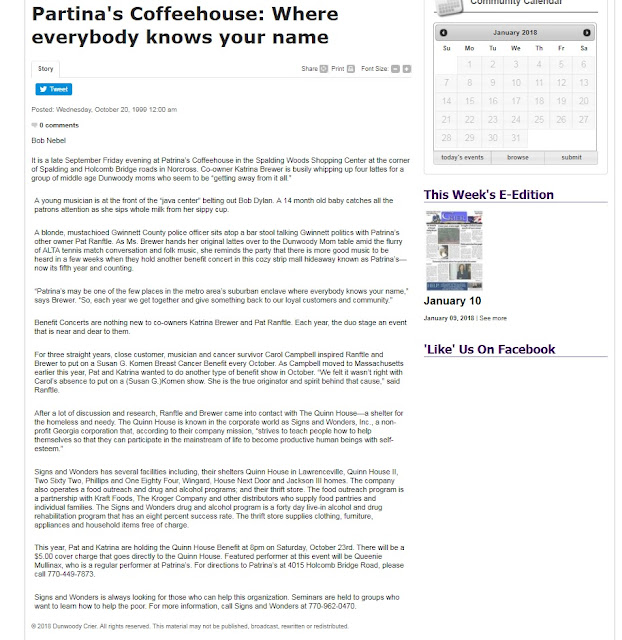 Sometimes the old stuff just bubbles back up on the 'Net. In this entry, I came across my 1999 feature on Patrina's Coffeehouse which was located in a strip mall in then-unincorporated Norcross, Georgia. I have no idea how much longer the link will work here, but if it doesn't, here is a screenshot below. Click on the image to get a clear view:
Post a Comment
Read more

The art of waiting for the best deal 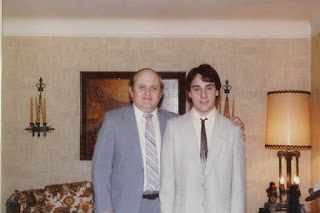 With Dad, a few years after purchasing the TI-99/4A, June 1985 There we were standing outside in a line during the wee hours, shivering like we never have before. We weren’t camping out for Bruce Springsteen tickets nor were we lining up to go into a football game. We were with others on a mission to purchase a new computer. Yes, there were computers on sale in late 1983. These so-called computers hooked up to your actual standard definition TV which served as a monitor for most systems. The exception was Radio Shack’s TRS 80 which was later called, “The Trash 80.” The now-canceled AMC cable television series Halt and Catch Fire more than got the scenario with the computers right with the portrayal of the Commodore 64 in most scenes. But we are not talking about the popular Commodore 64 here. We are talking about the TI-99/4A Texas Instruments computer. Word got out that it was selling for a ridiculously low price. Little did we realize that the futuristic piece of machiner
Post a Comment
Read more
More posts