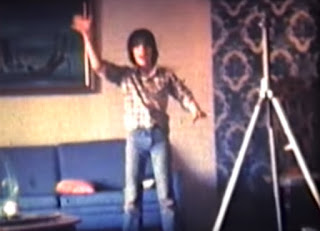 Forget all that crap about Trump/Russia collusion or the woes of Michael Avenatti because... wait for it... Kitty Wiggy turns 40!

"What in the world are you talking about?" the cynic who peruses the Internet will say.

A few months before this film was shot, Dan and I were walking home from a day at school. We  found a cat and brought him or her back to his house. I'm not going into the diatribe about how hard we had it because we happened to walk home on that day and many others. Plenty of times parents drove the few miles to retrieve us from school in good and bad weather. But on that late autumn day in 1978, we just took a cat back to Dan's and promptly named him or her, Kitty Wiggy. I'm not sure how long Dan and his family kept the cat because Dan had a white Persian cat named Princess not too far after that time. Princess was around for years and gave birth to many kitties in the early 1980s. Duchess came a little after Princess, but Dan's dad cut her life short by running over her with his Suburban truck.
One day in March 1979, Dan decided to take his sister's Bell & Howell camera after she used it to produce a film for her senior class project in high school. I believe that she and her boyfriend produced a themed-film for Paul Simon's "My Little Town," recorded just about four years before. Only a little more than a year later, that silent film set to a pop song would be known as a music video. After getting the green-light to get the camera, we coaxed Dan's dad to spring about $3.50 for a silent Super-8mm film cartridge. That cartridge limited the user to about 3:21 seconds which is about 50 feet of film. One had to economize, indeed!
I'll admit that Kitty Wiggy '79 is a silly soft-focused late 1970s home movie that pretty much looks like the zillions that were produced in those years. And while this whole post might seem silly to reminisce about what might be pointless to the reader or society at large, to me, the whole process was a turning point. A few years before this was shot, I was already interested in TV and film production. I wasn't sure what route I wanted to take in pursuing a career in any of those industries, I just wanted to be a part of it. Kitty Wiggy '79 changed all of that.
While we were filming, Dan read about how the filmmaker can make his or her subject disappear - just like they did in the TV series Bewitched. We tried that technique and at that moment, I was thinking how could this possibly work? When we got the film back after being processed at the local Revco - and threaded it into Dan's projector, I was in a trance. Okay, I was a kid, give me break.
As you can see in the film, Dan's house was more than a suburban home, it was a "fun-house" to us. Our imaginations soared in that place - along with the felines who roamed everywhere. I'm sad that kids today don't have that type of freedom. Even the years before this film was shot, Dan and I made the place into a haunted house, made phony phone calls and even made a boy's club in the basement.
Throughout grade, junior and high school, Dan's home literally housed many ersatz movie sets.
Kitty Wiggy '79 might be a few minutes of "nothing," but it was something to me and Dan - who went on to produce around 80 Super 8mm films from that year until we were in college. 2019 is a year of many milestones, this film being one of them. With time permitting, I'll keep writing about them. About a year or two ago, we learned that Dan's house was demolished. I suppose the gentrification that I witness here in my adopted home town of Atlanta, is happening in my old stomping grounds. As they say, many things do not last forever. They can demolish the physical house, but they cannot demolish our thoughts and memories.
By the way, the music was added from YouTube and is approved for this format.
Kitty Wiggy '79 was the first film for me and Dan. A few months before 'Kitty,' Dan filmed a project for his 6th grade teacher with classmate Mickey Joseph, called Fruity Fruits in late 1978. Mickey would go on to appear in one of our films in 1980.