It's official: E-scooters are a menace 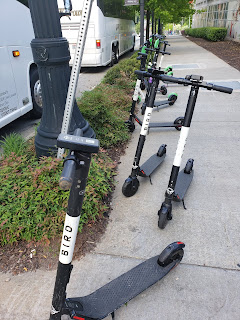 Back in mid-June I was taking my usual downtown stroll. On that humid evening, things were a tad different. The Hot 107.9 bash was taking place in and pretty much around downtown Atlanta’s Centennial Olympic Park. For those unaware, Hot 107.9, is a local hip-hop terrestrial radio station. There I was fitting in quite nicely with the throngs of concert/party-goers who were set to spend an evening with the likes of Migos, Yella Beezy, City Girls, Lil Yachty, Megan Thee Stallion and many other young talented artists of the day. I still have no idea who these performers are, but I rattled the list off to my twenty-something daughter who was sorry she missed the Hot 107.9 bash.

Many folks around my age would say that they would have felt awkward strolling in the Hot 107.9 throng, but I was perfectly happy to join these nice, young festive people who only wished to have a great time in the ATL. Indeed, I have quite an open mind.

On that evening, I took in the sights of young men sporting low-riding jeans where I could clearly make out their underwear labels and ladies wearing thongs while strutting down Marietta Street. There were all kinds of families hanging out around the park as well. Some participants even brought the kids along—some as young as about 5. They were properly treated to the blasting sounds emanating from passing tricked-out vehicles playing some beautiful musical productions featuring some great colorful language. Then there was the sweet smell of marijuana wafting through the air near the park. I’m no expert, but there must have been a few dozen varieties of mother nature consumed on that night.

Perhaps I received a contact buzz from the pot sailing through the air. The silver lining was that the buzz helped dull the pain after an e-scooter rider collided with me near the Embassy Suite’s main entrance on Marietta Street. While indulging in one of my podcasts, I felt that I was a bit safe from the scooters as I made my way down the sidewalk since I was in a crowd. My assumption proved to be bogus. As I was hearing Gilbert Gottfried cackle in my wireless headphones, suddenly my right foot was being crushed by the weight of the front wheel of an e-scooter. My New Balance shoe came right off, and the e-scooter rider quickly fell the ground while damaging the back-end of the scooter, cracking the taillight.

Onlookers were a bit surprised as was I in the moment. The e-scooter rider went on his merry way, attempting to dodge more pedestrians, curbs, cars and the many potholes that continue to plague the city of Atlanta.

“Oh no, my foot is broken! There goes my upcoming race (the Peachtree on the Fourth of July),” I thought to myself.

I continued walking, feeling a bit sore on the right side of my right foot, hoping that the foot will not get worse and balloon up to the side of a football that is featured in the front window in the nearby College Football Hall of Fame.

I completed my walk just fine and still experienced the soreness for the next few weeks but could keep running.

The whole e-scooter thing has been on my nerves for the past year or so. While many think the invention is nice and futuristic, I still fail to see any of its benefits. I’m all for advancing technology and progress, but I cannot see how these devices are helping society. Many argue that the e-scooters are a new, dynamic form of transportation that can replace cars on the roads. With the absence of building a real network on lanes on the roads for e-scooters, the idea that they can replace cars in ridiculous as well as flat-out wrong. After that collision, I’m more convinced that there is no way that e-scooters can co-exist with pedestrians, manual and electric bicycles as well as vehicles. Furthermore, I don’t buy the BS that e-scooters are great for that “last mile of connectivity” for consumers and travelers. In downtown Atlanta, there are literally hundreds of people at a time who attempt to joyride on these eyesores, not really trying to go from Point A to Point B. Yes, my Gen Z daughter disagrees. Sorry, girl, but I will have to agree to disagree. To me, e-scooters are a menace.