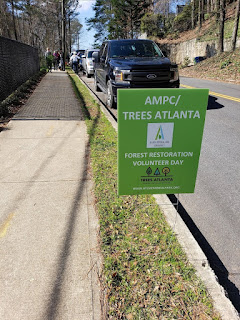 It seems that when it comes to weather, the bottom always falls out on MLK Day here in the Atlanta metro. Last year, I participated in the MLK Day Drum Run 5K. I made my way down to the Piedmont Park area, parked at Grady High School and then braved the 20-degree Fahrenheit morning. Of course, I was all bundled up for the occasion, but I was pondering why in the world it was a bit more tolerable on New Year’s Day 2019, when I was at Piedmont Park for the Resolution Run weeks prior. It even rained on that New Year’s Day run and still, it was not nearly as cold as it was on MLK Day.

This year, I decided to forgo the Drum Run and participate in another volunteer effort. I signed up to do another river clean-up, this time with the Chattahoochee Riverkeepers. Mind you, I signed up when we were experiencing 70-degree days in January – knowing full well that the temps would drop by MLK Day. Not only did the temps drops, they fell well beyond what I expected. Like most events such as runs or volunteer efforts in the ATL, they seem to happen rain or shine. I arrived at the river clean-up site about 30 minutes early. I waited along with other volunteers in our warm cars. As the clock drew near the start of the event, I was hoping one of my fellow volunteers would dive first into the cold to get started. I was curious why nothing was already set up as I check the e-mail on my phone.  I happened upon a cancellation notice that was just sent. Right after that discovery, the event organizer showed up to say that it was far too cold for any of us to get into the creek. However, the organizer told me that Trees Atlanta was on the other side of the park. I felt grateful that Trees Atlanta was nearby. It would have been a letdown to not do any volunteering on MLK Day.

I arrived at the Trees Atlanta site where dozens of other volunteers and I cleared away invasive plants in the park. English Ivy and Chinese privet are the big plants that we cleared out the area. We made tremendous progress. It always feels good to volunteer, but even better on MLK Day. In years past, I volunteered indoors on MLK Day, but without fail, it was freezing outside. Indeed, we are in January where it can be cold in Georgia and even Florida! Still, I typically hold out hope that we will have a mild MLK Day.