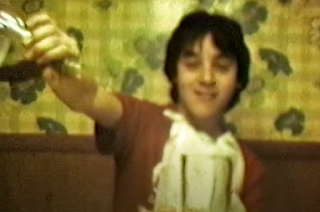 Friday The 13th What A Bad Day is one of those shorts obviously done on a lark. One afternoon we decided to do another experimental short without any pre-planning. I think we were well ahead of our time since zillions of productions have been done since without any pre-production.

This incredibly short Super 8mm silent film features an attempt at object animation. The one-frame option on Dan’s silent Bell & Howell camera was a function that we were truly discovering in those days. We read about mixing the regular 18 frames per second and the one-frame options in a short production.

This film is the first attempt at that “look.”

In our version of  ‘Friday the 13th,’I am coming into the house trying to pour some Pepsi, but the glass moves on its own. Yes, that’s the real product going all over Dan’s table. Like I wrote in this space: the place was our own funhouse.

Notice that I’m wearing a Coke shirt while pouring Pepsi.