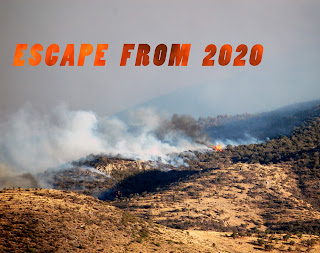 Hurricanes, fires, COVID and plenty of unrest around the nation and world is what describes the year 2020. All of these unfortunate events are obviously unwanted and all seem to come together at once. It is bad, but like anything else, it could get worse.

With that said, we cope -- or we at least try to cope. Some days, weeks or months are better and/or worse than others, but we continue to deal with the situations at hand. We either tackle them or we temporarily escape. Certainly, we would like to permanently escape the nightmares surrounding us, but there is no choice: we temporarily escape whenever possible.

Whether it is zoning in while escaping in film or television programs, gaming, listening to music or exercising, we go off into our own little bubbles for a while, hoping that everything will indeed be, “okay.”

While outdoor running is optimal for my escape, I see both the good and bad of society. The good is that nature is awesome. Whether a deer or squirrel crosses my path or the sounds of American Robins, Blue Jays or Carolina Wrens chirping into the wind, I feel blessed that I can traverse their territory. After all, we’re pretty much living in their homes since they were here first. Speaking of who was here first, I occasionally dodge a snake along the way. Common sense tells me that they’re not chasing me along the paths. Rather, they’re exploring just like I am on a typical lower-humid near-autumn morning.

On occasion, I see the troubling part of society. Over the years, I witnessed:

Obviously multi-tasking is not a good excuse for distracted driving, but I’m sure that those who have been caught by law enforcement for engaging in such activity used it as an excuse. Perhaps it’s the cynic in myself, but multitasking has been glamorized. If one is able to handle several tasks at once, then he or she is “successful.”

There is this one part of me that thinks, in the age of COVID, many things will cease, like the aforementioned good and bad things in our society. Instead, we’re hunkered down, so everything is neutral, is my “irrational reasoning.”

Oh, to the contrary!

The age of COVID has inspired people to behave in an irresponsible manner. Recently, a viral video of Target store patrons in Florida felt empowered to show that they refuse to wear masks. I’ll stop short here and not get one bit political. It’s just bad behavior, if not in my estimation, obnoxious.

On the flip side, there is the good in people during the age of COVID-19 in late 2020. One does not have to look far to see the courage and strength with our healthcare workers and first responders.

Still, there are times, I think, of the 1981 classic film, Escape From New York. Perhaps we’re all in a large prison, just begging to break out.