Fall-time for the ATL 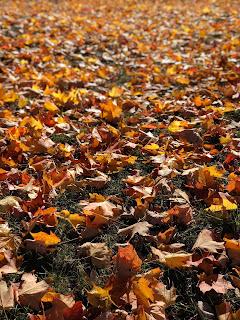 Fall is here. The chill is in the air. Well, certain days, it’s not, but for the most part, we have turned the corner officially from the humid season. What a season it was. It felt like we lived in the rainforest. We had equal parts heat, humidity and rain which was the perfect storm for endless weed growth. That means far too much time whacking down those weeds, cutting gross and trimming bushes.

Frankly, I’m over the yardwork and ready to move to Vegas. Well not so fast. Las Vegas, Nevada has plenty of its own issues. I never believe the old adage that they experience dry heat. No way. Heat is heat.

Who in the world needs Las Vegas’ critters and even worse, snakes! Forget about it! Speaking of “forget about it,” I’m not pushing so hard to move to New York or the northeastern part of the nation. Well, if I had to, I would, but I’m not fond of their cooler months. There’s no doubt that the northeastern quadrant of the nation is simply filled with amazing sites and culture, but I’ll visit when there’s no threat of snow.

While on the subject of snow, will we see any this year in the southeastern states? With the erratic weather in our lives, nothing would surprise me. After all, it’s been a bit since we experienced our own “Snowpocalypse.” I’m still floored that the Atlanta metro repeated that snow disaster in 2014 well after it happened in 1982. It all proves that collectively, this rather young metro area easily forgets its history. Certainly it’s sad, but perhaps one day, the ATL will be dedicated to respecting history so as not to repeat it over and over again. That is not only the definition of crazy, but also the definition of being naive.

So the leaves are falling again at a rapid rate while Halloween pretty much goes virtual. The kids won’t be at the front door this year for Treat or Treat, so this year, it’s pretty much a ghost town. What’s guaranteed this special year are the political yards signs which festoon neighborhoods, along roads and especially, freeway exits. They’re impossible to miss. Some of those signs will survive as some political contests will go into runoffs, but for the most part, they will be a distant memory once November 3, 2020 passes.

Speaking of that, we are continually reminded to get out the vote. Either by mail or in-person, it has become a sacred duty, rather than a passing opportunity. No matter what anyone says, “We are in it together,” and “We’re lucky to be in this nation.”